A Book to Burn and a Book to Keep (Hidden) 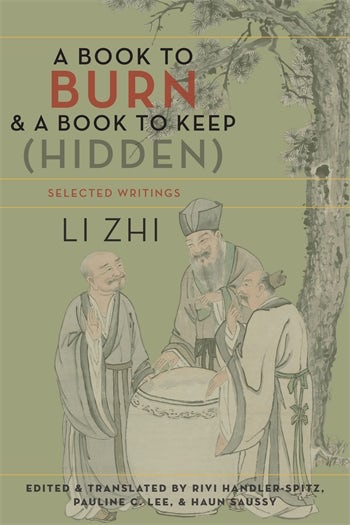 A Book to Burn and a Book to Keep (Hidden)

Li Zhi's iconoclastic interpretations of history, religion, literature, and social relations have fascinated Chinese intellectuals for centuries. His approach synthesized Confucian, Buddhist, and Daoist ethics and incorporated the Neo-Confucian idealism of such thinkers as Wang Yangming (1472–1529). The result was a series of heretical writings that caught fire among Li Zhi's contemporaries, despite an imperial ban on their publication, and intrigued Chinese audiences long after his death.

Translated for the first time into English, Li Zhi's bold challenge to established doctrines will captivate anyone curious about the origins of such subtly transgressive works as the sixteenth-century play The Peony Pavilion or the eighteenth-century novel Dream of the Red Chamber. In A Book to Burn and a Book to Keep (Hidden), Li Zhi confronts accepted ideas about gender, questions the true identity of history's heroes and villains, and offers his own readings of Confucius, Laozi, and the Buddha. Fond of vivid sentiment and sharp expression, Li Zhi made no distinction between high and low literary genres in his literary analysis. He refused to support sanctioned ideas about morality and wrote stinging social critiques. Li Zhi praised scholars who risked everything to expose extortion and misrule. In this sophisticated translation, English-speaking readers encounter the best of this heterodox intellectual's vital contribution to Chinese thought and culture.

The editors and translators of this volume have masterfully rendered into English the works of the fascinating—and highly controversial—Li Zhi, who significantly impacted late Ming thought. We will never look at the diversity of Chinese culture the same way again. Kang-i Sun Chang, Yale University

A rich translation of essays revealing Li Zhi as the epitome of dissent. His tragic suicide culminated Li's life as a free thinker, but at the same time his enemies immortalized him as someone who had defrocked Ming autocracy of its elegantly woven orthodoxies. He also provided Ming precedents for political repression under the Republic of China and the People's Republic. The PRC ironically appropriated Li Zhi's rhetoric, pretending that everyone was now liberated, as long as they towed the party line. Later Pierre Bourdieu honored him as China's homo academicus! Benjamin A. Elman, Princeton University

This volume of judiciously selected and aptly translated works by Li Zhi provides clear glimpses of his mental landscape and the ambient world of late Ming thought. The expert translators have revised hackneyed conventional interpretations of Li, enabling readers to form their own views of this early modern savant. On-cho Ng, Pennsylvania State University

Li Zhi (1527–1602), also known as Li Zhuowu, was a controversial philosopher, historian, and author of the late Ming Dynasty. A critic of the Cheng-Zhu School of Neo-Confucian thought, he was ultimately arrested for heresy and, rather than suffer exile, committed suicide in prison.

Rivi Handler-Spitz is assistant professor of Asian languages and cultures at Macalester College. She is the author of Symptoms of an Unruly Age: Li Zhi and Cultural Manifestations of Early Modernity (2017).

Pauline C. Lee is assistant professor of Chinese religions and culture at Saint Louis University. Her publications include Li Zhi, Confucianism, and the Virtue of Desire (2013).

Haun Saussy is University Professor at the University of Chicago. He is the author of The Problem of a Chinese Aesthetic (1993), Great Walls of Discourse and Other Adventures in Cultural China (2002), and The Ethnography of Rhythm (2016), as well as a number of coedited collections.