A College of Her Own

The History of Barnard 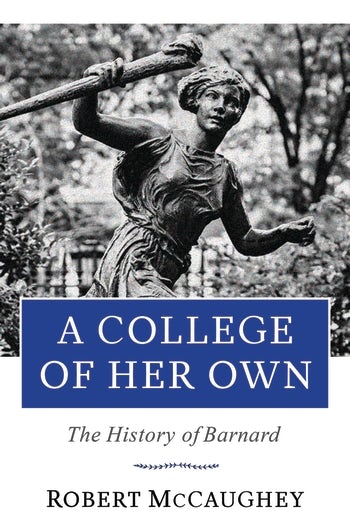 A College of Her Own

The History of Barnard

In 1889, Annie Nathan Meyer, still in her early twenties, led the effort to start Barnard College after Columbia College refused to admit women. Named after a former Columbia president, Frederick Barnard, who had advocated for Columbia to become coeducational, Barnard, despite many ups and downs, became one of the leading women’s colleges in the United States.

A College of Her Own offers a comprehensive and lively narrative of Barnard from its beginnings to the present day. Through the stories of presidents and leading figures as well as students and faculty, Robert McCaughey recounts Barnard’s history and how its development was shaped by its complicated relationship to Columbia University and its New York City location. McCaughey considers how the student composition of Barnard and its urban setting distinguished it from other Seven Sisters colleges, tracing debates around class, ethnicity, and admissions policies. Turning to the postwar era, A College of Her Own discusses how Barnard benefited from the boom in higher education after years of a precarious economic situation. Beyond the decisions made at the top, McCaughey examines the experience of Barnard students including the tumult and aftereffects of 1968 and the impact of the feminist movement. The concluding section looks at present-day Barnard, the shifts in its student body, and its efforts to be a global institution. Informed by McCaughey’s five decades as a Barnard faculty member and administrator, A College of Her Own is a compelling history of a remarkable institution.

A College of Her Own is an exemplary institutional history and contribution to NYC social history. Indeed, it is one of the most thorough and engaging accounts of a liberal arts college. Robert McCaughey provides a masterful depiction of the segmented social hierarchies of the city and their complex interactions with who attended the college, who ran it, and who supported it. Roger L. Geiger, author of American Higher Education Since World War II: A History

Contents
List of Illustrations
Acknowledgements
Preface
1. “What’s a New York Girl to Do?”
2. East Side, West Side: A Tale of Two Cities
3. Becoming Barnard
4. Who’s Afraid of Virginia Gilderesleeve?
5. Barnard in the Twenties
6. Lean Times: Depression, War, and Other Distractions
7. The McIntosh Era
8. Into the Storm
9. Saying No to Zeus
10. Barnard Rising
11. New York, New York
12. Going Global
Notes
Index