A Couple of Soles

A Comic Play from Seventeenth-Century China 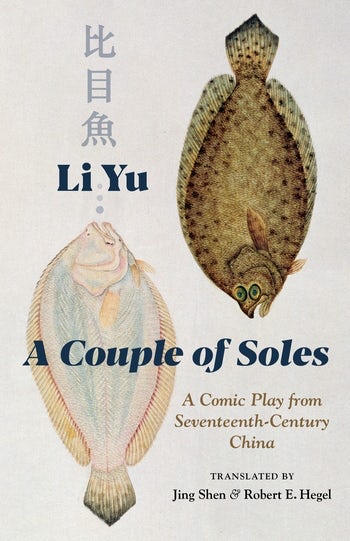 A Couple of Soles

A Comic Play from Seventeenth-Century China

A Couple of Soles is a classic comedic romance by the seventeenth-century playwright Li Yu. Tan Chuyu, a poor young scholar, falls in love with the beautiful actress Liu Miaogu. He joins her family’s acting troupe, and, in plays within the play, romance ensues. After Liu’s family attempts to marry her off to a local country squire, she performs a famous scene in which a heroine drowns herself—and then jumps off the stage into a river, followed by Tan. The local river deity rescues the lovers from death by transforming them into a pair of soles. Li balances their romance with the adventures of a retired upright official involving banditry, bribery, and mistaken identity—and who nets and shelters the two fish when they regain human form.

Written at a time when China was beginning to recover from the cataclysmic Ming-Qing dynastic transition, A Couple of Soles displays Li’s biting wit as well as his reflections on the concerns of his age, including the dangers of administrative service and the role of theater in society. The play combines witty wordplay and caustic satire with a strong emphasis on traditional moral values. The first major comedy from late imperial China to appear in English translation, A Couple of Soles provides an unparalleled view of the theater in seventeenth-century China. A general introduction and a detailed appendix shed further light on the play and its context.

A Couple of Soles is an entertaining example of seventeenth century Chinese drama made quite accessible to English-reading audiences. Of both literary and historical interest, and offering quite enjoyable drama, comedy, and romance, it's well worth a look. Complete Review

Li Yu ranks among China's finest wits, yet none of his ten comedies had been translated into English. This masterful yet accessible rendition of A Couple of Soles makes, at long last, Li Yu's comic genius and theatrical ingenuity visible to students, readers, theater practitioners, and drama scholars around the world. Patricia Sieber, The Ohio State University

A Couple of Soles displays to the Anglophone world the masterful craft of the Chinese dramatist Li Yu—worthy statesman of the theater, as he was called by admirers. Sustained by extensive commentaries, informative notes, and contemporary wood-block illustrations, this edition by Jing Shen and Robert E. Hegel exemplifies the very best of translation-in-research. An excellent addition to the Asian Classics library. Vibeke Børdahl, Copenhagen University

Li Yu and his work are critical to understanding Chinese theater of his day because he insisted on writing against established conventions and wrote the single most complete guide to playwriting before the end of the imperial period in China. We should all be very grateful to the translators for their effort and care in translating this fascinating example of chuanqi drama. David Rolston, University of Michigan

This brilliant book combines excellent scholarship about the innovative seventeenth-century dramatist Li Yu, noted for his unrestrained speech and behavior, with a wonderful translation of one of his comedies. Both translators have established reputations in the field of Chinese drama and literature, which this book will certainly enhance. Colin Mackerras, Griffith University

Acknowledgments
Note on the Translation
Introduction, by Jing Shen
Dramatis Personae and Their Role Categories
Preface, by Wang Duanshu
Scenes
A Couple of Soles
Appendix: The Playwright and His Art, by Jing Shen
Notes
Bibliography

Jing Shen is professor of Chinese language and literature at Eckerd College.