A Hunger for Aesthetics

Enacting the Demands of Art 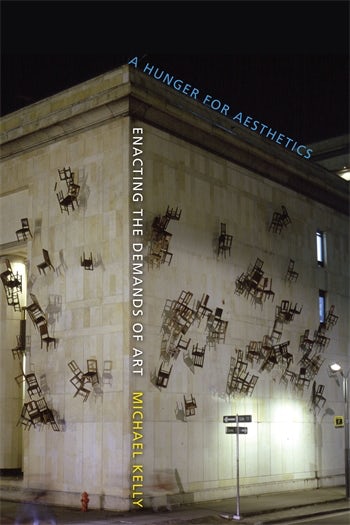 A Hunger for Aesthetics

Enacting the Demands of Art

For decades, aesthetics has been subjected to a variety of critiques, often concerning its treatment of beauty or the autonomy of art. Collectively, these complaints have generated an anti-aesthetic stance prevalent in the contemporary art world. Yet if we examine the motivations for these critiques, Michael Kelly argues, we find theorists and artists hungering for a new kind of aesthetics, one better calibrated to contemporary art and its moral and political demands.

Following an analysis of the work of Stanley Cavell, Arthur Danto, Umberto Eco, Susan Sontag, and other philosophers of the 1960s who made aesthetics more responsive to contemporary art, Kelly considers Sontag's aesthetics in greater detail. In On Photography (1977), she argues that a photograph of a person who is suffering only aestheticizes the suffering for the viewer's pleasure, yet she insists in Regarding the Pain of Others (2003) that such a photograph can have a sustainable moral-political effect precisely because of its aesthetics. Kelly considers this dramatic change to be symptomatic of a cultural shift in our understanding of aesthetics, ethics, and politics. He discusses these issues in connection with Gerhard Richter's and Doris Salcedo's art, chosen because it is often identified with the anti-aesthetic, even though it is clearly aesthetic. Focusing first on Richter's Baader-Meinhof series, Kelly concludes with Salcedo's enactments of suffering caused by social injustice. Throughout A Hunger for Aesthetics, he reveals the place of critique in contemporary art, which, if we understand aesthetics as critique, confirms that it is integral to art. Meeting the demand for aesthetics voiced by many who participate in art, Kelly advocates for a critical aesthetics that confirms the power of art.

For artists, critics, theoreticians, and the like, this book is a call to engage with philosophy's numerous critical resources. Michael Kelly takes a significant first stab at healing the deleterious rift between philosophical aesthetics, on the one hand, and art, art criticism, art history, and 'theory' on the other. This is an ambitious and important book! No other work in the literature—art historical or philosophical—makes such an attempt. A.W. Eaton, University of Illinois at Chicago

In elegant and trenchant commentaries on influential twentieth-century artists, art movements, and art theories (ranging from John Dewey to Susan Sontag and from Pop art to Doris Salcedo), Michael Kelly interrogates the 'anti-aesthetic' stance among certain artists and critics and in recent histories and philosophies of the arts, and reinvigorates the possibility of a robust critical aesthetics of art. Weaving careful attention to the aesthetic, social, and ethical claims of particular artworks with an investigation of a range of philosophical and critical responses to them, Kelly shows that the very possibilities of art as critique and of the critique of art demand—even 'hunger for'—an aesthetics that addresses the moral-political stakes and limits of art. Kelly's explication and defense of aesthetics as the grounds of art critique—rather than inimical to it—will interest not only philosophers of art and aestheticians of all stripes. In developing theoretical resources to renew the relations between aesthetics and ethics, social theory, and political economy, it will command the close attention of curators, historians, sociologists, and practitioners of the arts, especially those who have been tempted to abandon aesthetics. Whitney Davis, University of California, Berkeley

Useful for scholars in philosophy who are reflecting on the links between aesthetics and beauty in contemporary art. Literature and Aesthetics

Michael Kelly is professor of philosophy at the University of North Carolina, Charlotte, and president of the Transdisciplinary Aesthetics Foundation. He is the author of Iconoclasm in Aesthetics (2003), editor in chief of the Encyclopedia of Aesthetics (2014, second edition), and coeditor of Action, Art, History: Engagements with Arthur C. Danto (Columbia, 2007).