Desire and Diversity Across the World 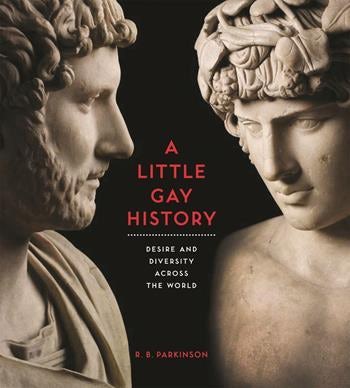 Desire and Diversity Across the World

When was the first chat line between men established? Who was the first "lesbian"? Were ancient Greek men who had sex with each other necessarily "gay," and what did Shakespeare think about crossdressing?

Illuminating... Parkinson's book reminds us there is nothing new about homosexuality. The Times (London)

[The book] draws on 40 objects, ranging from ancient Egyptian papyri to images by modern artists, including David Hockney. The Bookseller

[A Little Gay History] scans the Museum's collections for objects that show the complexity of desire in world cultures. From Indian gods to Emperor Hadrian, it proves that, if you swear by ancient tradition in matters of love and sex, you'll end up in the queerest spots. The Independent

[The book] explores artistic portrayals of what it means to be gay and the difficulties in finding records of same-sex desire. BBC News

Read the introduction to A Little Gay History: