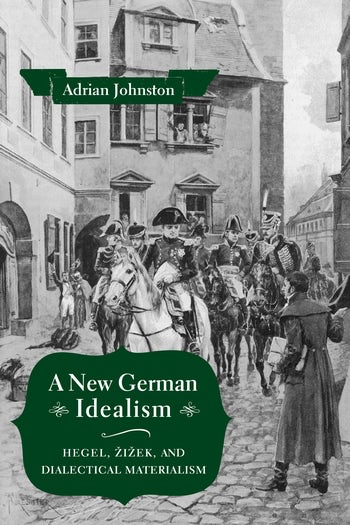 In 2012, philosopher and public intellectual Slavoj Žižek published what arguably is his magnum opus, the one-thousand-page tome Less Than Nothing: Hegel and the Shadow of Dialectical Materialism. A sizable sequel appeared in 2014, Absolute Recoil: Towards a New Foundation of Dialectical Materialism. In these two books, Žižek returns to the German idealist G. W. F. Hegel in order to forge a new materialism for the twenty-first century. Žižek’s reinvention of Hegelian dialectics explores perennial and contemporary concerns: humanity’s relations with nature, the place of human freedom, the limits of rationality, the roles of spirituality and religion, and the prospects for radical sociopolitical change.

In A New German Idealism, Adrian Johnston offers a first-of-its-kind sustained critical response to Less Than Nothing and Absolute Recoil. Johnston, a leading authority on and interlocutor of Žižek, assesses the recent return to Hegel against the backdrop of Kantian and post-Kantian German idealism. He also presents alternate reconstructions of Hegel’s positions that differ in important respects from Žižek’s version of dialectical materialism. In particular, Johnston criticizes Žižek’s deviations from the secular naturalism and Enlightenment optimism of his chosen sources of inspiration: not only Hegel, but Karl Marx and Sigmund Freud too. In response, Johnston develops what he calls transcendental materialism, an antireductive and leftist materialism capable of preserving and advancing the core legacies of the Hegelian, Marxian, and Freudian traditions central to Žižek.

A New German Idealism is the culmination of Johnston's decade-long dialogue with my work. Although we share the same basic orientation (Lacan and German idealism), we differ in some central points: Johnston privileges evolutionary biology as a scientific reference, while I privilege quantum physics. Not only am I proud to have such a highly qualified partner in the debate; I also think that, in his reaction to my work, Johnston touches on the key question of today's philosophy: how to move beyond a transcendental approach (in all its versions, inclusive of deconstruction) without retreating into naive realism (in the form of object-oriented ontology). Johnston's new book is thus indispensable reading for all those interested in the state of philosophy today at a time when its fate is challenged by the latest achievements in the brain sciences. In short, it is indispensable for all those who want to think in the authentic sense of the term. Slavoj Žižek, author of Less Than Nothing and Absolute Recoil

In almost real time, Johnston has chronicled Žižek's ground-breaking interventions in German Idealism with just enough distance to permit them to take hold of our imaginations and gather questions. As Žižek's recent work enters a profound new phase, Johnston demonstrates here that he is up to the challenges it presents. Combining clear, pedagogical appreciation with healthy doses of friendly fire, A New German Idealism unravels the work of one of the most important thinkers of our time in more ways than one. Not just a primer, but a stand-alone work of its own. Joan Copjec, author of Read My Desire: Lacan Against the Historicists

Ever since his first book, aptly titled Time Driven, Adrian Johnston in a way has been preparing himself for this summa of his philosophy. In an impressive synthesis that would take other mortals a whole lifetime to write, he brings together Hegel, Lacan, and Žižek to demonstrate that today's materialism is actually the recommencement of German Idealism. Bruno Bosteels, author of The Actuality of Communism

A New German Idealism offers a crucial intervention in the contemporary theoretical scene. Žižek is perhaps the most important living philosopher, and Johnston clarifies his thought on Hegel in an incredibly lucid way, while also introducing certain points of disagreement. In this important book, Johnston is able to give a detailed history of German Idealism while always keeping a theoretical idea in the background. Todd McGowan, author of Capitalism and Desire: The Psychic Cost of Free Markets

Through critical dialogue with Slavoj Žižek, Johnston has developed his own original philosophical vision. Countering the temptation to ontologize negativity, Johnston roots it in the contingent facticity of conflictual organic phenomena. The result is a defiantly nonmystical dialectical materialism that manages to reconcile Darwinian naturalism with German idealism. It is a uniquely sophisticated philosophical achievement. Ray Brassier, author of Nihil Unbound: Enlightenment and Extinction

A New German Idealism marks the most important step yet in Johnston’s efforts to translate Žižek’s importance for philosophical thought. It is, in fact, as ambitious as Žižek’s own claim to recast German Idealism for our time. Johnston’s excellent understanding of the idealist tradition in Germany (as strong as his inside understanding of post-Freudian psychoanalysis!) combined with his comprehensive understanding of the recent secondary literature makes his treatment an absolutely indispensable supplement to Žižek’s own work. Thomas Paul Brockelman, author of Žižek and Heidegger: The Question Concerning Techno-Capitalism

Ten years ago Adrian Johnston published Žižek’s Ontology, a path-breaking work, the first book that dealt at length with the basic tenets of Žižek’s oeuvre with all due seriousness, meticulousness, and critical perspicacity. Ten years later A New German Idealism brings not merely a much-needed updated sequel to that book, taking into account the major works that Žižek has published in the meantime, but a new critical engagement that goes further and deeper, addressing the core of the legacy of German idealism for our times. A rare case of what philosophical dialogue should be. Mladen Dolar, University of Ljubljana

Johnston’s psychoanalytic reconfiguration of the Hegel-Lacan-Žižek itinerary constitutes an indispensable Hegelian materialist alternative to both Derridean deconstruction and the neo-Cartesian rationalism of Alain Badiou. Johnston’s work reorients the task of thinking away from a noumenal 'real world' and toward the materiality of a subjectivity that is itself the substance it seeks. . . . Highly recommended. Choice

Adrian Johnston is Distinguished Professor in and Chair of the Department of Philosophy at the University of New Mexico and is a faculty member at the Emory Psychoanalytic Institute in Atlanta. His many books include Žižek’s Ontology: A Transcendental Materialist Theory of Subjectivity (2008); Prolegomena to Any Future Materialism, vol. 1: The Outcome of Contemporary French Philosophy (2013); and, with Catherine Malabou, Self and Emotional Life: Philosophy, Psychoanalysis, and Neuroscience (2013, Columbia University Press). With Todd McGowan and Slavoj Žižek, he is a coeditor of the book series Diaeresis at Northwestern University Press.