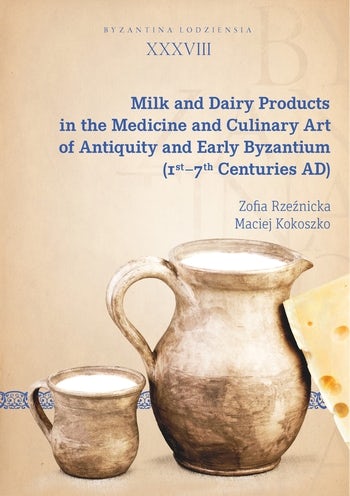 The following publication constitutes a continuation of a longstanding research conducted by both authors on nourishment, dietetics, pharmacology and gastronomy in the Late Antiquity and early Byzantium. The book was created based primarily on Greek medical treaties composed from the 1st to 7th century, but it takes into account data that originates outside of this collection.


The goal of the authors was to present the knowledge of the people in antiquity and Byzantium on milk and dairy products. To achieve that they attempted to translate into contemporary language the way of thinking of then doctors, and to present main points of the theory propagated by them. In particular, the authors have shown ways of utilizing aforementioned alimentary products as food and medicine. Thus, they consciously encroach the area of history of pharmacology and gastronomy. Even though the nature of their research led the authors to focus on conclusions in the field of the history of food and medicine, they also take up the issues related to society and economy of this period

The dissertation, which constitutes an extended and improved version of the book Ab ovo ad γάλα. Jajka, mleko i produkty mleczne w medycynie i w sztuce kulinarnej (I–VII w.) , Łódź 2016, ss. 263 [BL 28] is undoubtedly an important contribution to the research on the history of medicine and nutrition in the classical and the early Byzantine period. The remarks on terminology are essential, and they often influence the understanding and interpretation of other literary sources. The dissertation is of high scientific value and brings forward many relevant information: specific examples on how eggs, milk and diary were used, both in everyday nutrition, and in medical practice.
Thus there is a need for an English translation that would allow international academia to acquaint itself with this important scientific achievement. The originality of the research permits the publication in English to have a lasting presence in scientific discussion and will strenghten the image of the Polish research in Byzantine studies in the world. Anna Kotłowska - professor at the Adam Mickiewicz University in Poznan, specializing in Antiquity and Byzantine history.

Zofia Rzeźnicka, Ph. D., assistant professor in the Waldemar Ceran Research Centre for the History and Culture of the Mediterranean Area and South-East Europe, Ceraneum (University of Łódź).
Her research interests focus on medical and dietary literature of classical antiquity and Byzantium.

Maciej Kokoszko, dean of the Faculty of Philosophy and History, head of the Department of Byzantine History of the University of Łódź. He is the author of many books and articles in the field of dietetics and culinary art of the antiquity and early Byzantium.