What Would Happen If Americans Stopped Smoking? 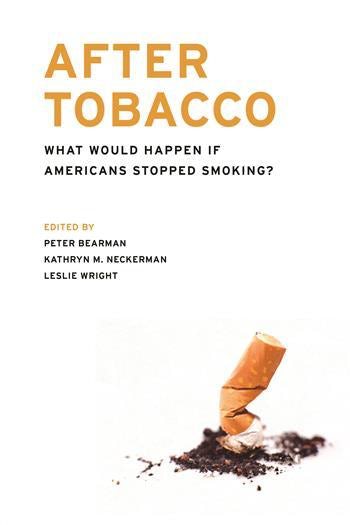 What Would Happen If Americans Stopped Smoking?

States have banned smoking in workplaces, restaurants, and bars. They have increased tobacco tax rates, extended "clean air" laws, and mounted dramatic antismoking campaigns. Yet tobacco use remains high among Americans, prompting many health professionals to seek bolder measures to reduce smoking rates, which has raised concerns about the social and economic consequences of these measures.

Retail and hospitality businesses worry smoking bans and excise taxes will reduce profit, and with tobacco farming and cigarette manufacturing concentrated in southeastern states, policymakers fear the decline of regional economies. Such concerns are not necessarily unfounded, though until now, no comprehensive survey has responded to these beliefs by capturing the impact of tobacco control across the nation. This book, the result of research commissioned by Legacy and Columbia University's Institute for Social and Economic Research and Policy, considers the economic impact of reducing smoking rates on tobacco farmers, cigarette-factory workers, the southeastern regional economy, state governments, tobacco retailers, the hospitality industry, and nonprofit organizations that might benefit from the industry's philanthropy. It also measures the effect of smoking reduction on mortality rates, medical costs, and Social Security. Concluding essays consider the implications of more vigorous tobacco control policy for law enforcement, smokers who face social stigma, the mentally ill who may cope through tobacco, and disparities in health by race, social class, and gender.

This collection dealing with the economic 'fallout' of a nonsmoking society provides a solid scientific basis for understanding just what would be the costs, benefits, and consequences if all the hard-fought interventions against smoking succeeded. This should be mandatory reading for policy makers and public health professionals who need to fully understand and communicate the benefits of a smoke-free society to those who remain skeptical about these benefits. Thomas E. Novotny, former assistant United States surgeon general

As these important essays so clearly show, if America became truly smoke free, the social, economic, and health consequences would be nothing short of profound. The essays collected here—representing diverse disciplinary approaches—point us toward the next critical phase of informed and effective tobacco control policies. Allan M. Brandt, Harvard University

What would happen if smoking rates plummeted because of more vigorous application of proven policies such as increasing the taxes on tobacco products and expanding the range of smoke-free locations? After Tobacco rigorously examines the potential impact of greatly decreased tobacco use on myriad sectors. It is an important resource for those interested in public policy, public health, government, economics, and health care. Steven A. Schroeder, Director of the Smoking Cessation Leadership Center, University of California

The expansive overview here is distinctive, while the work's technical nature makes it useful primarily for academic and government libraries serving policy makers. The antismoking lobby will also love it. Library Journal

A provocative book worthy of a careful read. Kirkus Reviews

a welcome contribution to an important public health topic for students as well as policy makers. Health Affairs