Agriculture and Industry in Brazil 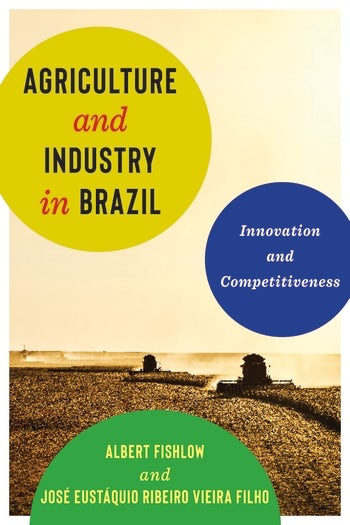 Agriculture and Industry in Brazil

Agriculture and Industry in Brazil is a study of the economics of Brazilian agriculture and industry, with a special focus on the importance of innovation to productivity growth. Albert Fishlow and José Eustáquio Ribeiro Vieira Filho examine technological change in Brazil, highlighting the role of public policy in building institutions and creating an innovation-oriented environment.

Fishlow and Vieira Filho tackle the theme of innovation from various angles. They contrast the relationship between state involvement and the private sector in key parts of the Brazilian economy, and compare agricultural expansion with expansion in the oil and aviation sectors. Fishlow and Vieira Filho argue that modern agriculture is a knowledge-intensive industry and its success in Brazil stems from public institution building. They demonstrate how research has played a key role in productivity growth, showing how prudent innovation policies can leverage knowledge not only within a particular company, but also across whole sectors of the economy. The book discusses whether and how Brazil can serve as a model for other middle-income countries eager to achieve higher growth and a more egalitarian distribution of income. An important contribution to comparative, international, and development economics, Agriculture and Industry in Brazil shows how the public success in agriculture became a leading drive for advance elsewhere.

This book’s treatment of the importance of innovation in the Brazilian agricultural sector and the role that Embrapa played in that innovation is extremely interesting, important, and original. Steven M. Helfand, University of California, Riverside

Albert Fishlow is professor emeritus at the School of International and Public Affairs at Columbia University. His many publications include Starting Over: Brazil Since 1985 (2011).

José Eustáquio Ribeiro Vieira Filho is currently program director of the Office of the Executive Secretary of the Brazilian Ministry of Agriculture, Livestock, and Supply. He is on leave from his tenured position as a senior researcher at the Institute of Applied Economic Research (IPEA-Brazil).