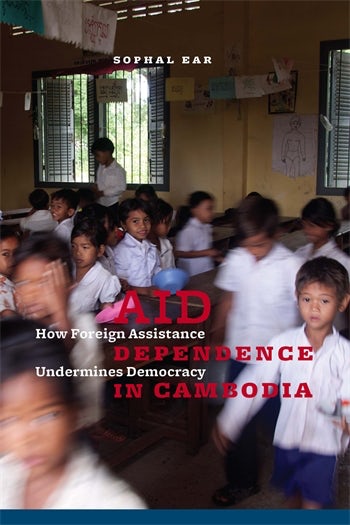 International intervention liberated Cambodia from pariah state status in the early 1990s and laid the foundations for more peaceful, representative rule. Yet the country's social indicators and the integrity of its political institutions declined rapidly within a few short years, while inequality grew dramatically. Conducting an unflinching investigation into these developments, Sophal Ear reveals the pernicious effects of aid dependence and its perversion of Cambodian democracy.

International intervention and foreign aid resulted in higher maternal (and possibly infant and child) mortality rates and unprecedented corruption by the mid-2000s. Similarly, in example after example, Ear finds the more aid dependent a country, the more distorted its incentives to develop sustainably. Contrasting Cambodia's clothing sector with its rice and livestock sectors and internal handling of the avian flu epidemic, he showcases the international community's role in preventing Cambodia from controlling its national development.

A postconflict state unable to refuse aid, Cambodia is rife with trial-and-error donor experiments and their unintended consequences, such as bad governance and poor domestic and tax revenue performance—a major factor curbing sustainable, nationally owned growth. By outlining the terms through which countries can achieve better ownership of their development, Ear offers alternatives for governments still on the brink of collapse, despite ongoing dependence on foreign intervention and aid.

Using cross-national statistical evidence and his immense knowledge of Cambodian society, Sophal Ear has produced an important book on the perverse effects of development aid on governance. If this could be the starting point from which future discussions began, there would be a much greater chance of outsiders truly helping poor countries to develop. James Robinson, Harvard University

Sophal Ear's Aid Dependence in Cambodia is both passionate and level-headed. Inspired by his family's history and based on extensive field interviews and careful case studies, it offers a sustained criticism of how aid policies have contributed to dependence and helped undermine fragile democracies. There are valuable lessons here for all countries attempting to build peace and development with international assistance. Michael Doyle, Columbia University

Khmer Rouge survivor Sophal Ear is uniquely qualified to address the issue of aid and dependence in developing countries. Much more than academic criticism, Aid Dependence in Cambodia also charts a path for Cambodian reform. Although it is highly unlikely, Cambodian leaders would be wise to heed Ear's advice. Peter Maguire, author of Facing Death in Cambodia

...offers valuable lessons not just for policy-makers working on Cambodia but also for other countries emerging from conflict or upheaval. Sebastian Strangio, Asia Times

Sophal Ear's work stands out for its social science rigour, its cohesion, as well as its probing quality, offering a new standard of scholarship on aid dependence not only applicable to the Cambodia case but easily replicable around the developing world. Geoffrey C. Gunn, Asian Affairs

An important and timely contribution to the field. It raises awareness around Cambodia, and sheds light on what is otherwise widespread apathy and complacency. Peter Tan Keo, The Diplomat

... Sophal Ear's logical, yet personal account of the impact that international foreign aid has on Cambodia, the country of his birth, should cause the entire aid community to reflect inwardly. Small Wars Journal

An excellent introduction to the literature on development on the region (and globally)... Everyone hoping to do some good in Cambodia ought to read this book... Journal of Southeast Asian Studies

Read the chapter, "An International Problem: The Cambodian Response to Highly Pathogenic Avian Influenza" (to view in full screen, click on icon in bottom right-hand corner)

Sophal Ear is an assistant professor of national security affairs at the U.S. Naval Postgraduate School, where he teaches courses on postconflict reconstruction and political economy. Previously, he worked for the World Bank and the United Nations. A graduate of Princeton University and the University of California, Berkeley, he arrived in the United States from France as a Cambodian refugee at the age of ten.