An Ethnic and Racial History of New York City 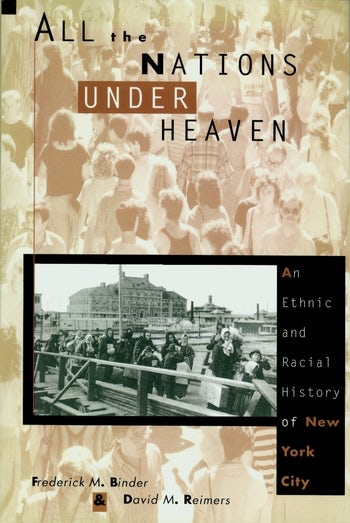 An Ethnic and Racial History of New York City

In certain neighborhoods of New York City, an immigrant may live out his or her entire life without even becoming fluent in English. From the Russians of Brooklyn's Brighton Beach to the Dominicans of Manhattan's Washington Heights, New York is arguably the most ethnically diverse city in the world. Yet no wide-ranging ethnic history of the city has ever been attempted.

In All the Nations Under Heaven, Frederick Binder and David Reimers trace the shifting tides of New York's ethnic past, from its beginnings as a Dutch trading outpost to the present age where Third World immigration has given the population a truly global character. All the Nations Under Heaven explores the processes of cultural adaptation to life in New York, giving a lively account of immigrants new and old, and of the streets and neighborhoods they claimed and transformed.

All the Nations Under Heaven provides a comprehensive look at the unique cultural identities that have wrought changes on the city over nearly four centuries since Europeans first landed on the Atlantic shore. While detailing the various efforts to retain a cultural heritage, the book also looks at how ethnic and racial groups have interacted—and clashed—over the years.

From the influx of Irish and Germans in the nineteenth century to the recent arrival of Caribbean and Asian ethnic groups in large numbers, All the Nations Under Heaven explores the social, cultural, political, and economic lives of immigrants as they sought to form their own communities and struggled to define their identities within the grwonig heterogeneity of New York. In this timely, provocative book, Binder and Reimers offer insight into the cultural mosaic of New York at the turn of the millennium, where despite a civic pride that emphasizes the goals of diversity and tolerance, racial and ethnic conflict continue to shatter visions of peaceful coexistence.

For New York City's legacy as the symbol of America's immigrant heritage to last, New Yorkers have to learn about themselves, in order to help themselves integrate harmoniously. The authors are right to say: "Those who truly love this great city believe that its future should and can be no less than its past." The Village Voice

Frederick Binder and David Reimers' wonderful new ethnic history of New York City... [is] an excellent work of synthesis, helping us to see familiar history in a new and instructive way, as well as a joy to read. The authors are particularly persuasive in making the case that New York's multiethnic present is essentially continuous with its past...As our country seeks new way to balance diveristy and equality, one wonders if this history might not provide some practical lessongs for the nation as a whole." Newsday

Despite the fact that New York (nee New Amsterdam) has long been on of the most racially and culturally heterogeneous cities in the world, few have tried to encompass this reality in a single study. For this reason and for many others relating to the narrative itself, this work is unique. It is a comprehensive, informative, and analytic survey--and a good read, too. Choice

Robert Snyder is associate professor in the department of American Studies at Rutgers-Newark. He is the author of Crossing Broadway: Washington Heights and the Promise of New York City (Cornell University Press, 2014) and Transit Talk: New York’s Bus and Subway Workers Tell Their Stories (Rutgers University Press, 1998). In addition to scholarly journals, his work has also been published in The Nation, the New York Times, the Columbia Journalism Review, and other general-interest publications.