Immigrants, Migrants, and the Making of New York, Revised Edition 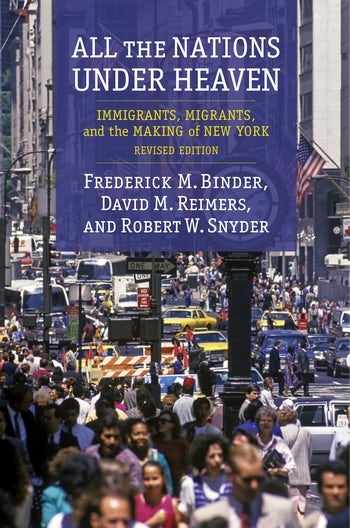 Immigrants, Migrants, and the Making of New York, Revised Edition

First published in 1996, All the Nations Under Heaven has earned praise and a wide readership for its unparalleled chronicle of the role of immigrants and migrants in shaping the history and culture of New York City. This updated edition of a classic text brings the story of the immigrant experience in New York City up to the present with vital new material on the city’s revival as a global metropolis with deeply rooted racial and economic inequalities.

All the Nations Under Heaven explores New York City’s history through the stories of people who moved there from countless places of origin and indelibly marked its hybrid popular culture, its contentious ethnic politics, and its relentlessly dynamic economy. From Dutch settlement to the extraordinary diversity of today’s immigrants, the book chronicles successive waves of Irish, German, Jewish, and Italian immigrants and African American and Puerto Rican migrants, showing how immigration changes immigrants and immigrants change the city. In a compelling narrative synthesis, All the Nations Under Heaven considers the ongoing tensions between inclusion and exclusion, the pursuit of justice and the reality of inequality, and the evolving significance of race and ethnicity. In an era when immigration, inequality, and globalization are bitterly debated, this revised edition is a timely portrait of New York City through the lenses of migration and immigration.

A new cohort of students and readers more generally will now be made aware of a classic work, All the Nations Under Heaven, a profoundly humane and exciting panorama of the linked histories of New York City and immigrants. The flow of women and men from around the world has done no less than shape them, the city, the nation, and the world. This book sweeps across time, connecting past and present with scrupulous research, clear thinking, rich detail, and fine writing. Hasia Diner, New York University

Updated throughout and extended to the present through the latest scholarship, this enduring classic demonstrates once again how central the growth of immigrant-origin communities has been to the neighborhoods, collective life, politics, and economy of New York City. All the Nations Under Heaven brings to life the great and ongoing saga of immigrants helping a great city to reinvent itself. John Mollenkopf, coeditor of Unsettled Americans: Metropolitan Context and Civic Leadership for Immigrant Integration

All the Nations Under Heaven reveals the powerful social, political, economic, and religious influence of immigrants on New York City since the colonial era. Expanding on current scholarship, the authors make immigration history and the broader history of New York City accessible for both students and scholars. Deborah Dash Moore, author of Jewish New York: The Remarkable Story of a City and a People

Frederick M. Binder (1931–2016) was professor of history at the City University of New York. His works include The Way We Lived: Essays and Documents in American Social History (1988).

David M. Reimers is professor emeritus of history at New York University. His Columbia University Press books include Unwelcome Strangers: American Identity and the Turn Against Immigration (1999) and Ethnic Americans: A History of Immigration (fifth edition, 2009).

Robert W. Snyder is professor of journalism and American studies at Rutgers University–Newark. His books include Transit Talk: New York’s Bus and Subway Workers Tell Their Stories (1998) and Crossing Broadway: Washington Heights and the Promise of New York City (2014).