American Literature in the World

An Anthology from Anne Bradstreet to Octavia Butler 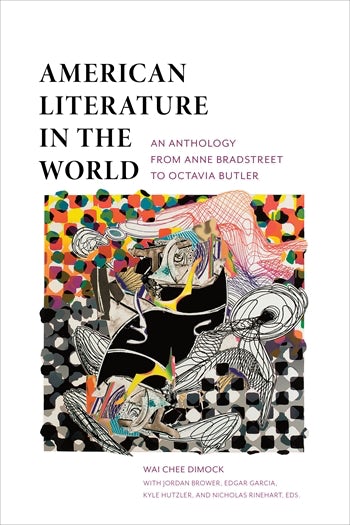 American Literature in the World

An Anthology from Anne Bradstreet to Octavia Butler

American Literature in the World is an innovative anthology offering a new way to understand the global forces that have shaped the making of American literature. The wide-ranging selections are structured around five interconnected nodes: war; food; work, play, and travel; religions; and human and nonhuman interfaces. Through these five categories, Wai Chee Dimock and a team of emerging scholars reveal American literature to be a complex network, informed by crosscurrents both macro and micro, with local practices intensified by international concerns. Selections include poetry from Anne Bradstreet to Jorie Graham; the fiction of Herman Melville, Gertrude Stein, and William Faulkner; Benjamin Franklin's parables; Frederick Douglass's correspondence; Theodore Roosevelt's Rough Riders; Langston Hughes's journalism; and excerpts from The Autobiography of Malcom X as well as Octavia Butler's Dawn. Popular genres such as the crime novels of Raymond Chandler, the comics of Art Spiegelman, the science fiction of Philip K. Dick, and recipes from Alice B. Toklas are all featured. More recent authors include Junot Diaz, Leslie Marmon Silko, Jonathan Safran Foer, Edwidge Danticat, Gary Shteyngart, and Jhumpa Lahiri. These selections speak to readers at all levels and invite them to try out fresh groupings and remap American literature. A continually updated interactive component at www.amlitintheworld.yale.edu complements the anthology.

An inventive, exciting anthology of American literature that promises to make teaching and taking a survey course a global adventure! Collages of clustered texts around thematic nodes suggest creative juxtapositions certain to spark student interest. Familiar classics and less-known texts are well balanced, and the digital platform brings the American survey course into the twenty-first century of collaborations. Susan Stanford Friedman, author of Planetary Modernisms: Provocations on Modernity Across Time

This is a vital anthology, both in conception and execution. For students and faculty alike, it will create an unprecedented sense of the dynamic force fields of American literature. I'm especially impressed by the anthology's fluid movement across media platforms and geographical divides. Rob Nixon, Princeton University

With the inimitable vision we have come to expect from her, Dimock has assembled a nimble model for reading American literature beyond U.S. borders and traditional periodization, across both space and time. This vision of American literary history as an international, outward-facing, worldly tradition is timely and needed. Anna Brickhouse, University of Virginia

Wai Chee Dimock is William Lampson Professor of English and American Studies at Yale University. Her most recent books are Shades of the Planet: American Literature as World Literature (2007) and Through Other Continents: American Literature across Deep Time (2006). Editor of PMLA, and a film critic for the Los Angeles Review of Books, her essays have also appeared in Critical Inquiry, the Chronicle of Higher Education, the New York Times, and the New Yorker.