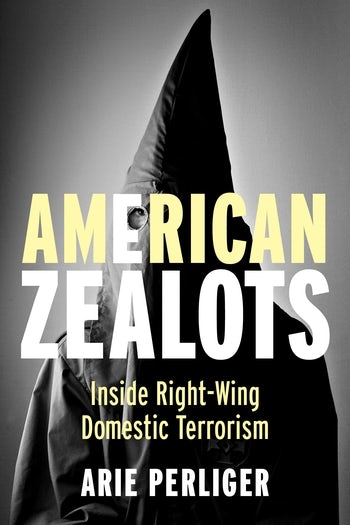 In an unsettling time in American history, the outbreak of right-wing violence is among the most disturbing developments. In recent years, attacks originating from the far right of American politics have targeted religious and ethnic minorities, with a series of antigovernment militants, religious extremists, and lone-wolf mass shooters inspired by right-wing ideologies. The need to understand the nature and danger of far-right violence is greater than ever.

In American Zealots, Arie Perliger provides a wide-ranging and rigorously researched overview of right-wing domestic terrorism. He analyzes its historical roots, characteristics, tactics, rhetoric, and organization, assessing the current and future trajectory of the use of violence by the far right. Perliger draws on a comprehensive dataset of more than 5,000 attacks and their perpetrators between 1990 and 2018 in order to explore key trends in American right-wing terrorism. He describes the entire ideological spectrum of the American far right, including today’s white supremacists, antigovernment groups, and antiabortion fundamentalists, as well as the histories of the KKK, skinheads, and neo-Nazis. Based on these findings, Perliger suggests counterterrorism policies that can respond effectively to the far-right threat. A groundbreaking examination of violence spawned from right-wing ideologies, American Zealots is essential reading for everyone seeking to understand the transformation of domestic terrorism.

American Zealots is an immensely timely and important publication. Written by one of this country's foremost authorities on far-right extremist violence, it provides a comprehensive analysis of this movement's evolution and trajectory and its implications for American society and politics. Bruce Hoffman, author of Inside Terrorism

Arie Perliger is professor and director of the graduate program in security studies at the School of Criminology and Justice Studies at the University of Massachusetts, Lowell. His many publications on political violence include Jewish Terrorism in Israel (Columbia, 2009).