Why Commercialism Won in Modern America 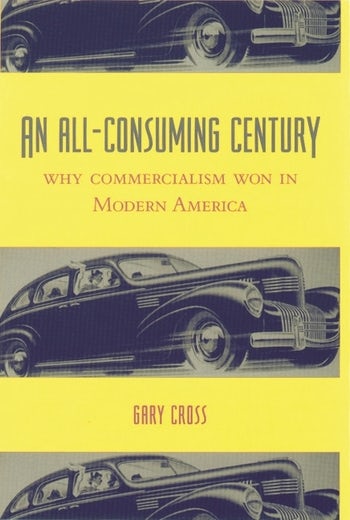 Why Commercialism Won in Modern America

The unqualified victory of consumerism in America was not a foregone conclusion. The United States has traditionally been the home of the most aggressive and often thoughtful criticism of consumption, including Puritanism, Prohibition, the simplicity movement, the '60s hippies, and the consumer rights movement. But at the dawn of the twenty-first century, not only has American consumerism triumphed, there isn't even an "ism" left to challenge it. An All-Consuming Century is a rich history of how market goods came to dominate American life over that remarkable hundred years between 1900 and 2000 and why for the first time in history there are no practical limits to consumerism.

By 1930 a distinct consumer society had emerged in the United States in which the taste, speed, control, and comfort of goods offered new meanings of freedom, thus laying the groundwork for a full-scale ideology of consumer's democracy after World War II. From the introduction of Henry Ford's Model T ("so low in price that no man making a good salary will be unable to own one") and the innovations in selling that arrived with the department store (window displays, self service, the installment plan) to the development of new arenas for spending (amusement parks, penny arcades, baseball parks, and dance halls), Americans embraced the new culture of commercialism—with reservations. However, Gary Cross shows that even the Depression, the counterculture of the 1960s, and the inflation of the 1970s made Americans more materialistic, opening new channels of desire and offering opportunities for more innovative and aggressive marketing. The conservative upsurge of the 1980s and '90s indulged in its own brand of self-aggrandizement by promoting unrestricted markets. The consumerism of today, thriving and largely unchecked, no longer brings families and communities together; instead, it increasingly divides and isolates Americans.

Consumer culture has provided affluent societies with peaceful alternatives to tribalism and class war, Cross writes, and it has fueled extraordinary economic growth. The challenge for the future is to find ways to revive the still valid portion of the culture of constraint and control the overpowering success of the all-consuming twentieth century.

The best survey yet written of the history of modern American consumer society... Avoiding the extremes of celebration and condemnation that too often pass for analysis, Cross's searching book is imbued with a generous concern for the revival of an active, democratic and participatory public sphere. Lawrence B. Glickman, The Nation

Cross shows how 'private, widespread and ephemeral commodity culture'has altered daily life, 'especially how people relate to nature and to one another.'The author of fine historical studies of various aspects of consumer culture, Cross is particularly well placed to undertake such a daunting task. Journal of American History

By telling the story of how consumerism trumped social forces from Prohibition to the Simplicity movement, Cross brilliantly re-evaluates the bonds of family and community sold off to pay for the stuff with which we now populate our lives. San Francisco Chronicle

It takes a historian to provide an appreciation of how far Americans have wandered from the days when consumerism was slightly suspect, and Gary Cross is superbly up to the task. Alan Wolfe, The New Republic

Cross has done prodigious work on the era that redefined the pursuit of happiness as the unbounded desire for goods. Building on an impressive range of scholarship, he lays out the sinews of a dazzling 100 years of American productivity chock full of the economic equivalents of flying rugs and magic lamps. Tom Engelhardt, Los Angeles Times Book Review

[An] absorbing cultural history of how Americans' personal and public identities have evolved in relationship with consumer goods. Publishers Weekly

This readable modern history is enlivened. The Economist

Thought-provoking... Cross has offered a perceptive view of how American identities have evolved and are perceived in relation to a thriving consumer culture. Margaret Walsh, University of Nottingham, History

The great merit of this book is that it characterizes consumerism as a social and political force. Unlike many critics who simply reduce consumerism to the individual pursuit of material comfort, Cross casts it as a compelling ideology that concretely expresses the major ideals that have guided the last century: liberty and democracy. Norman Wirzba, Christian Reflection

Gary Cross, professor of history at Penn State, is author of numerous articles and eight books, including Kid's Stuff: Toys and the Changing Worlds of American Childhood, Time and Money: The Making of Consumer Culture, A Quest for Time: The Reduction of Work in Britain and France, and Technology and American Society.