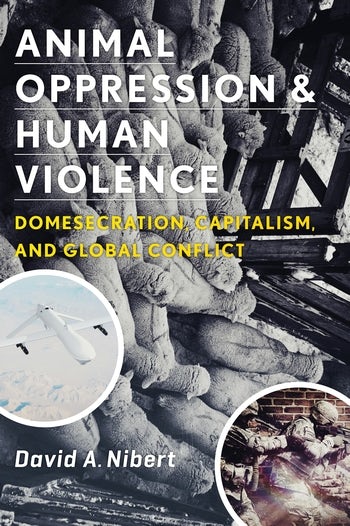 Jared Diamond and other leading scholars have argued that the domestication of animals for food, labor, and tools of war has advanced the development of human society. But by comparing practices of animal exploitation for food and resources in different societies over time, David A. Nibert reaches a strikingly different conclusion. He finds in the domestication of animals, which he renames "domesecration," a perversion of human ethics, the development of large-scale acts of violence, disastrous patterns of destruction, and growth-curbing epidemics of infectious disease.

Nibert centers his study on nomadic pastoralism and the development of commercial ranching, a practice that has been largely controlled by elite groups and expanded with the rise of capitalism. Beginning with the pastoral societies of the Eurasian steppe and continuing through to the exportation of Western, meat-centered eating habits throughout today's world, Nibert connects the domesecration of animals to violence, invasion, extermination, displacement, enslavement, repression, pandemic chronic disease, and hunger. In his view, conquest and subjugation were the results of the need to appropriate land and water to maintain large groups of animals, and the gross amassing of military power has its roots in the economic benefits of the exploitation, exchange, and sale of animals. Deadly zoonotic diseases, Nibert shows, have accompanied violent developments throughout history, laying waste to whole cities, societies, and civilizations. His most powerful insight situates the domesecration of animals as a precondition for the oppression of human populations, particularly indigenous peoples, an injustice impossible to rectify while the material interests of the elite are inextricably linked to the exploitation of animals.

Nibert links domesecration to some of the most critical issues facing the world today, including the depletion of fresh water, topsoil, and oil reserves; global warming; and world hunger, and he reviews the U.S. government's military response to the inevitable crises of an overheated, hungry, resource-depleted world. Most animal-advocacy campaigns reinforce current oppressive practices, Nibert argues. Instead, he suggests reforms that challenge the legitimacy of both domesecration and capitalism.

An impressive and extensive historical analysis of key intersections between the exploitation of animals and the oppression of human beings. The Year's Work in Critical and Cultural Theory

A profoundly important book and should be widely read and discussed. AAG Review of Books

One of the great virtues of Animal Oppression and Human Violence is that it holds the potential for providing the expanding but vastly interdisciplinary field of Animal Studies with a unifying theory, and is therefore a highly significant contribution to this field. Brian M. Lowe, Society & Animals

Read an excerpt from the chapter, "Social Construction of the 'Hamburger' Culture. (to view in full screen, click on icon in bottom right-hand corner)

David A. Nibert worked as a tenant organizer and community activist before becoming a professor of sociology at Wittenberg University in Springfield, Ohio. He teaches courses on animals and society and global change and is the author of Animal Rights/Human Rights: Entanglements of Oppression and Liberation.