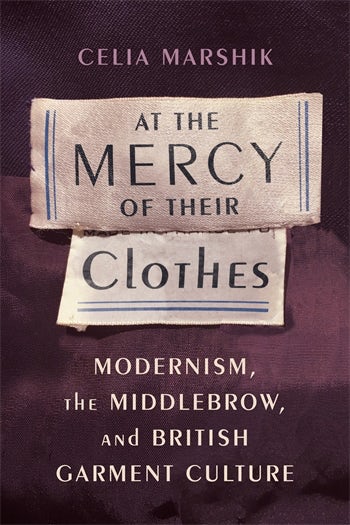 In much of modern fiction, it is the clothes that make the character. Garments embody personal and national histories. They convey wealth, status, aspiration, and morality (or a lack thereof). They suggest where characters have been and where they might be headed, as well as whether or not they are aware of their fate. At the Mercy of Their Clothes explores the agency of fashion in modern literature, its reflection of new relations between people and things, and its embodiment of a rapidly changing society confronted by war and cultural and economic upheaval. In some cases, people need garments to realize themselves. In other cases, the clothes control the person who wears them.

Celia Marshik's study combines close readings of modernist and middlebrow works, a history of Britain in the early twentieth century, and the insights of thing theory. She focuses on four distinct categories of modern clothing: the evening gown, the mackintosh, the fancy dress costume, and secondhand attire. In their use of these clothes, we see authors negotiate shifting gender roles, weigh the value of individuality during national conflict, work through mortality, and depict changing class structures. Marshik's dynamic comparisons put Ulysses in conversation with Rebecca, Punch cartoons, articles in Vogue, and letters from consumers, illuminating opinions about specific garments and a widespread anxiety that people were no more than what they wore. Throughout her readings, Marshik emphasizes the persistent animation of clothing—and objectification of individuals—in early-twentieth-century literature and society. She argues that while artists and intellectuals celebrated the ability of modern individuals to remake themselves, a range of literary works and popular publications points to a lingering anxiety about how political, social, and economic conditions continued to constrain the individual.

In At the Mercy of Their Clothes, Celia Marshik deftly weaves together high, low, and middlebrow culture, archival and literary sources, fashion studies, social history, and philosophy. The result is a volume that illuminates the overwhelming, charged power of clothes in the modernist era. Marshik tackles the biggest issues: how fashion conveys meaning; how clothes create or dismantle social identity; the role of material culture in art, literature, and history; and finally, how we live both with and through objects. A work of superb, wide-ranging research offering an intriguing new perspective. Rhonda Garelick, Author of Mademoiselle: Coco Chanel and the Pulse of History

This is a marvelous book. At The Mercy of Their Clothes is timely, original, and ranges widely. Marshik dexterously puts current conversations in fashion studies into serious dialogue with the literary—alongside the archival, the visual, the journalistic and the psychological. Moreover, in sewing together under-read middlebrow and popular writers with what we thought we knew about modernism, Marshik lets us hear these "garment-things" speak. Jessica Burstein, author of Cold Modernism: Literature, Fashion, Art

Marshik convincingly demonstrates that few things are more worrisomely lively than the clothes we wear. More than simply magical talismans or fetish objects, they are potentially hazardous wights that can leech away human subjectivity. The inward turn of modernism, when seen this way, becomes less about a Freudian discovery of inner riches than about an ongoing retrenchment in which the self becomes ever more subject to things—and particularly to those things we wear every day. This book is far more than just a study of clothing... it is a significant rethinking of modernism, combining cultural history and theoretical innovation on almost every page. Sean Latham, University of Tulsa

Clothes are dangerous. Instead of presenting dress as a form of self-expression, Marshik reveals its power to diminish, imperil and undo the modern self. In this highly original and exciting book, she ranges from Ulysses to the Sunday Pictorial, from Mrs. Dalloway to The Tale of Mr. Jeremy Fisher, demonstrating the potentiality of garments across modernist, middlebrow and popular cultures in Britain. A superb achievement. Faye Hammill, University of Strathclyde, Glasgow

At the Mercy of their Clothes makes an important contribution to a developing critical tradition that focuses on garments and fashion to assess how writers of the early twentieth century debated and constructed individuality in a time marked by socio-economic and techno- logical change. It will be of immense interest to scholars and students of early twentieth-century literature, modernism, and material culture. I, for one, have already assigned the mackintosh chapter as essential reading for my Ulysses class next year. Vike Martina Plock, Modernism/modernity

At the Mercy of Their Clothes offers a brilliant compendium of archival material woven into a tightly articulated and important argument about material culture’s intersections with the literary and art worlds that will enrich readers’ scholarship and teaching. Sarah Cornish, The Space Between: Literature and Culture 1914-1945

At the Mercy of Their Clothes sheds light on the vexed relationships between garments and their wearers in the early twentieth century, and each chapter is engaging as well as versatile in its attention to modernist and middlebrow voices. Throughout, Marshik’s research is thorough and absorbing, and her argument persuasive. Emily James, Woolf Studies Annual

Fluently written and deftly argued, Marshik’s book is a landmark work. . . . The insights in At the Mercy of Their Clothes: Modernism, The Middlebrow, and British Garment Culture will be of interest to all scholars working on texts and textiles, and for those at the intersection of modernist and middlebrow studies, Marshik’s work constitutes essential reading. Helen Saunders, The Modernist Review

Celia Marshik’s At the Mercy of Their Clothes: Modernism, the Middlebrow, and British Garment Culture is a seminal text at the forefront of current conversations bringing fashion studies into the realm of the literary. Jarica Linn Watts, James Joyce Quarterly

At the Mercy of Their Clothes is a significant, sophisticated, and genuinely illuminating account of Modernism’s relationship to the middlebrow and to popular culture. Katherine Mullin, James Joyce Literary Supplement

We have all experienced the punishing power of clothes. The pair of jeans that no longer fit: they, rather than our expanding waist, become the symbol of our disappointing self-image. The bold pattern that felt emboldening at home in front of the mirror, but at the party seems too loud and makes us feel conspicuous and awkward. Celia Marshik’s At the Mercy of Their Clothes: Modernism, Middlebrow, and British Garment Culture is a brilliantly researched and immensely readable catalogue of such anxious moments and their implications for selfhood. Sophie Oliver, The Review of English Studies

Marshik’s work brings a critical and indispensable lens to the impact and effects of clothing in the twentieth century and will be of interest to Woolf scholars and a wide range of scholars interested in popular culture, middlebrow and modernist texts, and history. Lois Gilmore, Virginia Woolf Miscellany

List of Illustrations
Acknowledgments
Introduction: At the Mercy of Their Clothes
1. What Do Women Want? At the Mercy of the Evening Gown
2. Wearable Memorials: Into and Out of the Trenches with the Modern Mac
3. Aspiration to the Extraordinary: Materializing the Subject Through Fancy Dress
4. Serialized Selves: Style, Identity, and the Problem of the Used Garment
Coda: Precious Clothing
Notes
Bibliography
Index

Celia Marshik is professor of English at Stony Brook University. She is the author of British Modernism and Censorship (2006) and the editor of The Cambridge Companion to Modernist Culture (2014).