Bad Science, Risky Medicine, and the Search for a Cure 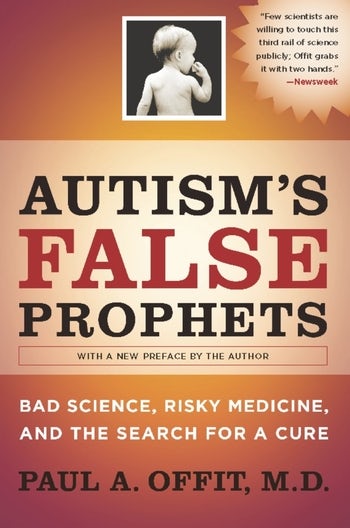 Bad Science, Risky Medicine, and the Search for a Cure

A London researcher was the first to assert that the combination measles-mumps-rubella vaccine known as MMR caused autism in children. Following this "discovery," a handful of parents declared that a mercury-containing preservative in several vaccines was responsible for the disease. If mercury caused autism, they reasoned, eliminating it from a child's system should treat the disorder. Consequently, a number of untested alternative therapies arose, and, most tragically, in one such treatment, a doctor injected a five-year-old autistic boy with a chemical in an effort to cleanse him of mercury, which stopped his heart instead.

Children with autism have been placed on stringent diets, subjected to high-temperature saunas, bathed in magnetic clay, asked to swallow digestive enzymes and activated charcoal, and injected with various combinations of vitamins, minerals, and acids. Instead of helping, these therapies can hurt those who are most vulnerable, and particularly in the case of autism, they undermine childhood vaccination programs that have saved millions of lives. An overwhelming body of scientific evidence clearly shows that childhood vaccines are safe and does not cause autism. Yet widespread fear of vaccines on the part of parents persists.

In this book, Paul A. Offit, a national expert on vaccines, challenges the modern-day false prophets who have so egregiously misled the public and exposes the opportunism of the lawyers, journalists, celebrities, and politicians who support them. Offit recounts the history of autism research and the exploitation of this tragic condition by advocates and zealots. He considers the manipulation of science in the popular media and the courtroom, and he explores why society is susceptible to the bad science and risky therapies put forward by many antivaccination activists.

Every child has a right to be vaccinated against deadly diseases. We started Every Child By Two to protect children from diseases. It didn't occur to me that I would also have to protect them from misinformation about life-saving vaccines. Paul A. Offit's book sets the facts straight. Rosalynn Carter, former first lady, cofounder of Every Child By Two

Autism's False Prophets is a compelling story of heartbroken parents, understandably desperate for an explanation of autism, being taken in by false hopes unsupported by genuine science. This book goes to the heart of a question that affects every aspect of American culture and political life. Are public policies to be determined by evidence and reason or by emotions that, however intense they may be, have nothing to do with reality? Susan Jacoby, author of The Age of American Unreason

A definitive analysis of a dangerous and unnecessary controversy that has put the lives of children at risk. Paul A. Offit shows how bad science can take hold of the public consciousness and lead to personal decisions that endanger the health of small children. Every parent who has doubts about the wisdom of vaccinating their kids should read this book. Peter C. Doherty, Ph.D., St. Jude's Children's Research Hospital and Nobel Laureate in Medicine for fundamental contributions in Immunology

In his latest book Paul A. Offit unfolds the story of autism, infectious diseases, and immunization that has captivated our attention for the last decade. His lively account explores the intersection of science, special interests, and personal courage. It is provocative reading for anyone whose life has been touched by the challenge of autism spectrum disorders. Susan K. Klein, MD, Ph.D., Case Western Reserve Hospital, and Rainbow Babies and Children's Hospital, Case Medical Center

Arguably the most courageous and most knowledgeable scientist about vaccines in the United States. Robert Goldberg, New York Post

[Dr. Offit] has done a huge public service by exposing the tragic and dangerous place the anti-vaccine hysteria has taken us. Huntly Collins, Philadelphia Inquirer

An invaluable chronicle that relates some of the many ways in which the vulnerabilities of anxious parents have been exploited. Linda Seebach, Wall Street Journal

A good read and an important piece of work. Lisa Jo Rudy, About.com

More than a book about a disease, it is an ode to uncorrupted science and a cautionary tale that data alone is never enough. SEED magazine

A very helpful book for both medical personnel and parents. The New England Journal of Medicine

The book is a fantastic read. I recommend it to all physicians and their patients and families. Brian Alverson, MD, Archives of Pediatric & Adolescent Medicine

This is a powerful book which should be read by all professionals working in the area ofmedicine. Michael Fitzgerald, Social History of Medicine

Paul A. Offit is one of the most respected scientists and clinicians in a field of vital importance to public health. Patricia M. Rodier, BioScience

[This] book doesn't just show that the anti-vaccine activists are wrong; it attempts to explain why, in our culture, they tend to win. Jason Fagone, Philadelphia Magazine

Detailed but easily readable... should be required reading for any parents who are considering denying vaccination to their children. Communication: The Magazine of the National Autistic Society

Arguably the most detailed and thorough history available of the current anti-vaccine movement. Roy Richard Grinker, Journal of Autism and Developmental Disorders

[A] must-read... it will keep pediatricians and pediatric neurologists awake over the nightmarish possibilities of pseudoscience in the 21st century. Roger A. Brumback, M.D., Journal of Child Neurology

Seeking to help readers realize the truth about Autism, Autism's False Prophets is a much need read, not to be missed. Midwest Book Review

For a detailed review of diseases, vaccines, and the objections the vaccine lobbyists have brought to the table, books by the prolific Paul Offit are a good place to start. Abigail Zuger, The New York Times

Introduction
1. The Tinderbox
2. Lighting the Fuse
3. The Implosion
4. A Precautionary Tale
5. Mercury Rising
6. Mercury Falling
7. Behind the Mercury Curtain
8. Science in Court
9. Science and the Media
10. Science and Society
11. A Place for Autism
Epilogue

Paul A. Offit, MD, FAAP is the chief of Infectious Diseases and the director of the Vaccine Education Center at the Children's Hospital of Philadelphia as well as the Maurice R. Hilleman Professor of Vaccinology and professor of pediatrics at the University of Pennsylvania School of Medicine. He has received numerous awards, including the J. Edmund Bradley Prize for Excellence in Pediatrics from the University of Maryland School of Medicine, the Young Investigator Award in Vaccine Development from the Infectious Diseases Society of America, and a Research Career Development Award from the National Institutes of Health. An international expert on rotavirus-specific immune responses, Dr. Offit is the coinventor of the rotavirus vaccine RotaTeq, for which he received the Jonas Salk Award from the Association for Professionals in Infection Control and Epidemiology, the Gold Medal from the Children's Hospital of Philadelphia, and the Stanley A. Plotkin Award in Vaccinology from the Pediatric Infectious Diseases Society. He has donated all royalties from sales of this book to autism research.