Beauty in the Age of Empire

Japan, Egypt, and the Global History of Aesthetic Education 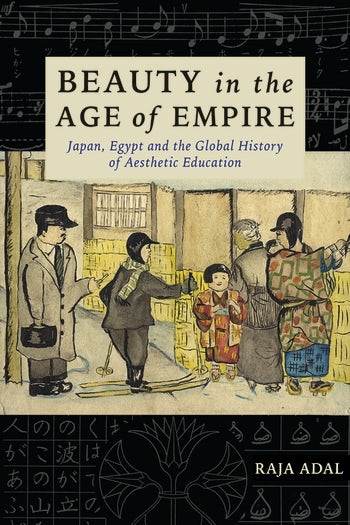 Beauty in the Age of Empire

Japan, Egypt, and the Global History of Aesthetic Education

When modern primary schools were first founded in Japan and Egypt in the 1870s, they did not teach art. Yet by the middle of the twentieth century, art education was a permanent part of Japanese and Egyptian primary schooling. Both countries taught music and drawing, and wartime Japan also taught calligraphy. Why did art education become a core feature of schooling in societies as distant as Japan and Egypt, and how is aesthetics entangled with nationalism, colonialism, and empire?

Beauty in the Age of Empire is a global history of aesthetic education focused on how Western practices were adopted, transformed, and repurposed in Egypt and Japan. Raja Adal uncovers the emergence of aesthetic education in modern schools and its role in making a broad spectrum of ideologies from fascism to humanism attractive. With aesthetics, educators sought to enchant children with sounds and sights, using their ears and eyes to make ideologies into objects of desire. Spanning multiple languages and continents, and engaging with the histories of nationalism, art, education, and transnational exchanges, Beauty in the Age of Empire offers a strikingly original account of the rise of aesthetics in modern schools and the modern world. It shows that, while aesthetics is important to all societies, it was all the more important for those countries on the receiving end of Western expansion, which could not claim to be wealthier or more powerful than Western empires, only more beautiful.

Raja Adal’s enchantingly original study analyzes the aesthetic education prescribed for children (in music, art, and calligraphy) in late nineteenth- and twentieth century Egypt and Japan as their educational policy makers sought to balance the sources of national tradition and the attractions of European modernity. Drawing on mastery of both Japanese and Arabic, this philosophically informed study lets us transcend any simplified categories of Western and non-Western civilizational projects. Charles Maier, author of Once Within Borders: Territories of Power, Wealth, and Belonging Since 1500

Raja Adal’s exemplary Beauty in the Age of Empire charts how aesthetics was used in modernizing societies like Japan and Egypt to ‘enchant’ citizens while reinforcing a changing political environment. Through national schools, a new curriculum inculcated in children a desire to support the value of national identity rather than affectively perform personal responses to artistic expression. Adal shows how this aesthetic education moved along the scale of singularity, from the one place of the nation, to the worldliness of ‘many places.’ Harry Harootunian, author of Uneven Moments: Reflections on Japan's Modern History

Beauty in the Age of Empire is a unique and fascinating analysis that tracks complex genealogies of aesthetic education through colonialism, empire, and nation-building. It both provincializes Eurocentric histories of the aesthetic and provides a deeper understanding of the cultivation of modern childhood. Jessica Winegar, author of Creative Reckonings: The Politics of Art and Culture in Contemporary Egypt

Examining three forms of aesthetic education in modern Egypt and Japan, Beauty in the Age of Empire reveals how similar ideals and anxieties accompanied the project of forming national subjects in countries compelled into nation-making by Western imperialism in the nineteenth century. In lucid and straightforward prose, Adal guides readers into the “global archive” of modern schooling. Striking parallels and new insights abound. This is a vivid and fresh approach to global modernity. Jordan Sand, author of House and Home in Modern Japan: Architecture, Domestic Space, and Bourgeois Culture, 1880-1930

List of Illustrations
Note on Names
Acknowledgments
Introduction
1. The Modern School as a Global Archive
Part I: Music, Calligraphy, and the Education of the Inner Self
Interlude: How Culture Travels: A Global History of the Piano
2. Music Education and the Uses of Aesthetics
3. Writing Education and the Location of Aesthetics
Part II: From Mimesis to Art: Drawing Education and the Rise of the Independent Subject
Interlude: Mimesis and Seduction in National Anthems
4. The Mimetic Moment: The Age of Global Mimesis and Representational Mimesis
5. The End of Global Mimesis: The Rise of the National Subject
6. The End of Representational Mimesis: The Rise of the Individual Subject
Conclusion
Notes
Works Cited
Index

Raja Adal is assistant professor of history at the University of Pittsburgh.