Between a Man and a Woman? 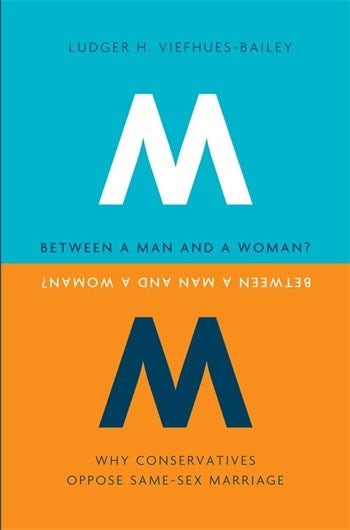 Between a Man and a Woman?

Focusing primarily on texts produced by Focus on the Family, a leading media and ministry organization informing conservative Christian culture, Viefhues-Bailey identifies two distinct ideas of male homosexuality: gender-disturbed and passive; and oversexed, strongly masculine, and aggressive. These homosexualities enable a complex ideal of Christian masculinity in which men are encouraged to be assertive toward the world while also being submissive toward God and family. This web of sexual contradiction influences the flow of power between the sexes and within the state. It joins notions of sexual equality to claims of "natural" difference, establishing a fraught basis for respectable romantic marriage. Heterosexual union is then treated as emblematic of, if not essential to, the success of American political lifeyet far from creating gender stability, these tensions produce an endless striving for balance. Viefhues-Bailey's final, brilliant move is to connect the desire for stability to the conservative Christian movement's strategies of political power.

Viefhues-Bailey does, however, very effectively clarify some crucial points in frequently enlightening ways, and the book constitutes a useful and significant intervention into this most confounding political impasse of our time. Whitney Strub, H-HistSex

...Viefhues-Bailey's book participates in a reserved yet powerful undermining of homophobia in general... Books and Ideas

Author's Note
Acknowledgments
1. Introduction
Who Are the Conservative Christians, by and Why the Focus on Focus on the Family?
Connection to Previous Research
Structure of the Book
Theoretical Considerations and Methodological Consequences
2. Religious Interests Between Bible and Politics
Love Between Gays or Lesbians Is Wrong, by Because the Bible Tells Me So?
A Confluence of Forces: Religion and Politics
3. America and the State of Respectable Christian Romance
Same-Sex Couples and the Moral and Spiritual Stamina of the Nation
Theologies of Christian Marriage
American (Christian) Marriage: A History of Change
Protecting the Body Politic: A Political Analysis
Conclusion: Religion, by Respectability
4. Same-Sex Love and the Impossibility of Christian Femininity and Masculinity
Gays and Feminists: From Logic to Rhetoric
Christian Masculinity as Crisis
Submission and the Crisis of Christian Womanhood
Complicated Flows of Power in Ordinary Family Life
5. A Political and Sexual Theology of Crisis
Beyond Functionalism
Struggling for the Christian Life
A Political and Sexual Theology of Crisis
Notes
Bibliography
Index

Ludger Viefhues-Bailey is associate professor for methods and theory in the study of religion at Yale University and the author of Beyond the Philosopher's Fears: A Cavellian Reading of Gender, Religion, and Origins in Modern Skepticism. His teaching and research concerns the intersection of globalization, gender, epistemology, and the theory of religion.