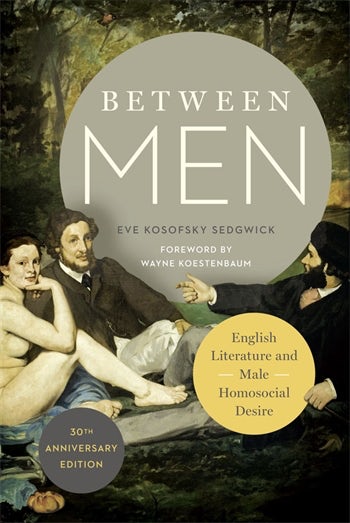 First published in 1985, Between Men was a decisive intervention in gender studies, a book that all but singlehandedly dislodged a tradition of literary critique that suppressed queer subjects and subjectivities. With stunning foresight and conceptual power, Eve Kosofsky Sedgwick's work opened not only literature but also politics, society, and culture to broader investigations of power, sex, and desire, and to new possibilities of critical agency.

Illuminating with uncanny prescience Western society's evolving debates on gender and sexuality, Between Men still has much to teach us. With a new foreword by Wayne Koestenbaum emphasizing the work's ongoing relevance, Between Men engages with Shakespeare's Sonnets, Wycherley's The Country Wife, Sterne's A Sentimental Journey Through France and Italy, Hogg's The Private Memoirs and Confessions of a Justified Sinner, Tennyson's The Princess, Eliot's Adam Bede, Thackeray's The History of Henry Esmond, Esq., and Dickens's Our Mutual Friend and The Mystery of Edwin Drood, among many other texts. Its pathbreaking analysis of homosocial desire in Western literature remains vital to the future of queer studies and to explorations of the social transformations in which it participates.

One of the most influential texts in gender studies, men's studies and gay studies. New York Times Book Review

Groundbreaking.... Between Men not only put Sedgwick on the map as a queer theorist, it helped to establish the field of queer literary analysis. Jane Hu, Page-Turner blog, The New Yorker

Between Men will lead you into the small corners where vast plains open up—the perspective-defying, vertiginous angles that Sedgwick has the power to reveal with a density and graciousness that permit exaltation and inaugurate utopia. From the foreword by Wayne Koestenbaum

Foreword: The Eve Effect, by Wayne Koestenbaum
Preface to the 1993 Edition
Acknowledgments
Introduction
1. Gender Asymmetry and Erotic Triangles
2. Swan in Love: The Examples of Shakespeare's Sonnets
3. The Country Wife: Anatomies of Male Homosocial Desire
4. A Sentimental Journey: Sexualism and the Citizen of the World
5. Toward the Gothic: Terrorism and Homosexual Panic
6. Murder Incorporated: Confessions of a Justified Sinner
7. Tennyson's Princess: One Bride for Seven Brothers
8. Adam Bede and Henry Esmond: Homosocial Desire and the Historicity of the Female
9. Homophobia, Misogyny, and Capital: The Example of Our Mutual Friend
10. Up the Postern Stair: Edwin Drood and the Homophobia of Empire
Coda. Toward the Twentieth Century: English Readers of Whitman
Notes
Bibliography
Index

Eve Kosofsky Sedgwick (1950–2009) was Distinguished Professor of English at the Graduate Center, City University of New York. Her books include Tendencies; A Dialogue on Love; Touching Feeling: Affect, Pedagogy, Performativity; The Coherence of Gothic Conventions; and Epistemology of the Closet.

Wayne Koestenbaum is Distinguished Professor of English at the Graduate Center, City University of New York.