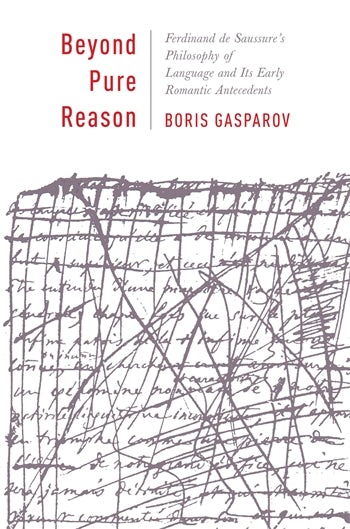 The Swiss linguist Ferdinand de Saussure (1857–1913) revolutionized the study of language, signs, and discourse in the twentieth century. He successfully reconstructed the proto-Indo-European vowel system, advanced a conception of language as a system of arbitrary signs made meaningful through kinetic interrelationships, and developed a theory of the anagram so profound it gave rise to poststructural literary criticism.

The roots of these disparate, even contradictory achievements lie in the thought of Early German Romanticism, which Saussure consulted for its insight into the nature of meaning and discourse. Conducting the first comprehensive analysis of Saussure's intellectual heritage, Boris Gasparov links Sassurean notions of cognition, language, and history to early Romantic theories of cognition and the transmission of cultural memory. In particular, several fundamental categories of Saussure's philosophy of language, such as the differential nature of language, the mutability and immutability of semiotic values, and the duality of the signifier and the signified, are rooted in early Romantic theories of "progressive" cognition and child cognitive development. Consulting a wealth of sources only recently made available, Gasparov casts the seeming contradictions and paradoxes of Saussure's work as a genuine tension between the desire to bring linguistics and semiotics in line with modernist epistemology on the one hand, and Jena Romantics' awareness of language's dynamism and its transcendence of the boundaries of categorical reasoning on the other. Advancing a radical new understanding of Saussure, Gasparov reveals aspects of the intellectual's work previously overlooked by both his followers and his postmodern critics.

Boris Gasparov brings great clarity to and elaborates on the rather freely used terminology associated with Ferdinand de Saussure, such as the notion of the arbitrariness of language and the 'binaries' of synchronic and diachronic aspects of language and of the signifier and the signified. Furthermore, Gasparov negotiates the uncompleted claims and unresolved contradictions of Saussure's work by invoking the early German Romantic discourse on language. His comparative reading offers a reciprocal illumination of the respective critical legacies of early German (Jena) Romanticism and Saussure's oeuvre. This volume should be of great interest to scholars of literary criticism and history, Romantic literary theory and literary modernity, and structuralism and poststructuralism, and to 'Saussurians' of all creeds. Azade Seyhan, Bryn Mawr College, author of Writing Outside the Nation

Anyone interested in how modern linguistics and structuralism in general came to be...should read it. Language Hat

Rigorous, substantive, and superbly researched.... truly an excellent addition, and in some ways a corrective, to Saussurean scholarship.... Highly recommended. Choice

Acknowledgments
Abbreviations
Introduction: Saussure, "Saussurism," and "Saussurology"
1. The Person
2. The Writings
3. Antinomies of the Sign
4. Fragmentation and Progressivity: Saussure's Semiotics in the Mirror of Early Romantic Epistemology
5. Diachrony and History
6. The Anagram
7. Linguistics of Speech: An Unrealizable Promise?
Conclusion: Freedom and Mystery—the Peripathetic Nature of Language
Works Cited
Index

Read the introduction "Saussure, 'Saussurism,' and 'Saussurology'" (to view in full screen, click on icon in bottom right-hand corner):

Boris Gasparov is professor of Russian, cochair and founder of the University Seminar on Romanticism, and a member of the Seminars on Linguistics and Slavic History and Culture at Columbia University. Educated in linguistics and musicology in Moscow in the 1960s, he completed his intellectual development in Tartu, Estonia, which at the time was a renowned center of research on cultural history, semiotics, and poetics. Gasparov immigrated to the United States in 1981 and taught at the University of California, Berkeley, for eleven years before settling at Columbia. His publications include Five Operas and a Symphony: Word and Music in Russian Culture, which received the ASCAP Deems Taylor Award, and Speech, Memory, and Meaning: Intertextuality in Everyday Language. He is also the editor of Cultural Mythologies of Russian Modernism: From the Golden Age to the Silver Age.