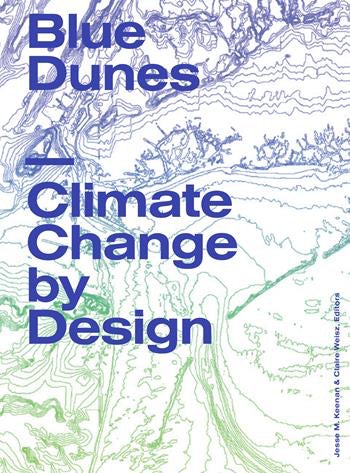 Blue Dunes chronicles the design of artificial barrier islands developed to protect the Mid-Atlantic region of North America in the face of climate change. It narrates the complex, and sometimes contradictory, research agenda of an unlikely team of analysts, architects, ecologists, engineers, physicists, and planners addressing extreme weather and sea level rise within the practical limitations of science, politics, and economics.

The primary strength of this edited volume is the treatment of the complexity resulting from the combination of experts with such disparate backgrounds, including design, coastal oceanographic modeling, risk modeling, coastal ecology, planning, economics, and others. Choice

Highly detailed, interdisciplinary, and technically complex, Blue Dunes also manages to be a rather beautiful book. . . . But most important of all, it is a window into the types of engineering and scientific ingenuity, not to mention political and economic will, that will be necessary to guard against the effects of climate change. Ray Bert, Civil Engineering

Jesse M. Keenan is a member of the faculty of the Graduate School of Design at Harvard University. Keenan is an internationally recognized expert in the fields of adaptation science and climate change planning and design. Keenan serves as the vice chair of the U.S. Community Resilience Panel for Buildings and Infrastructure Systems under the White House Climate Adaptation Plan and is a lead editor of the Built Environment section at the U.S. Climate Resilience Toolkit at climate.gov.

Claire Weisz, FAIA is an architect, urbanist, and educator. She is a founding principal of the award-winning firm WXY architecture + urban design, whose New York City-based practice focuses on innovative approaches to public space, buildings, and cities. WXY is a leader in advancing resilience practices at the intersection of architecture, planning, landscape and urban design. Weisz is a fellow of the American Institute of Architects and has taught design and planning studios at Yale University, New York University, Cornell University, and the City University of New York.