Breaking with the Past 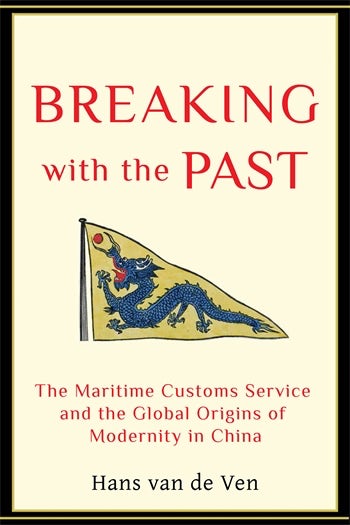 Breaking with the Past

Between its founding in 1854 and its collapse in 1952, the Chinese Maritime Customs Service delivered one-third to one-half of all revenue collected by China's central authorities. Much more than a tax collector, the institution managed China's harbors, erected lighthouses, and surveyed the Chinese coast. It funded and oversaw the Translator's College, which trained Chinese diplomats while its staff translated Chinese classics, novels, and poetry and wrote important studies on the Chinese economy, its financial system, its trade, its history, and its government. It organized contributions to international exhibitions, developed its own shadow diplomacy, pioneered China's modern postal system, and even maintained its own armed force. After the 1911 Revolution, the agency became deeply involved in the management of China's international loans and domestic bond issues.

In other words, the Customs Service was pivotal to China's post-Taiping integration into the world of modern nation-states and twentieth-century trade and finance. If the Customs Service introduced the modern governance of trade to China, it also made Chinese legible to foreign audiences. Following the activities of the Inspectors General, who were virtual autocrats within the service and communicated regularly with senior Chinese officials and foreign diplomats, this history tracks the Customs Service as it transformed China and its relationship to the world. The Customs Service often kept China together when little else did. This book reveals the role of the agency in influencing the outcomes of the Sino-French War, the Boxer Rebellion, and the 1911 Revolution, as well as the rise of the Nationalists in the 1920s, and concludes with the Customs Service purges of the early 1950s, when the relentless logic of revolution dismantled the agency for good.

Far more than an institutional history of the Customs Service, this book is effectively a complete new history of China's rocky entrance into the global political economy. There is no better book written at this level of historical research and archival detail on the subject of 'China and the West.' Timothy Brook, University of British Columbia

Breaking with the Past is a superb example of a turn in history that is now coming to maturity: the challenge to bring the foreign back into Chinese history. By using an agency that was indisputably central to the operation of Chinese government for a century, Hans van de Ven makes a groundbreaking contribution that demonstrates that we cannot understand modern China without placing it in the context of globalization. Many topics we thought we knew are related by van de Ven in a fresh and convincing way. His study utilizes hard data and incorporates the human narrative at its core. This is historical writing of the highest order. Rana Mitter, University of Oxford

The Chinese Maritime Customs Service was central to China's interaction with a world being reshaped by imperialism and globalization after 1842, and at the same time it lay at the very heart of modern Chinese state-building. Hans van de Ven's masterly account of this foreign-led Chinese state agency sheds much new light on the personalities involved, its operations and impact, and syncretic character and forces us to think afresh about China's entangled encounters with the foreign and the modern. Robert Bickers, author of The Scramble for China: Foreign Devils in the Qing Empire, 1832–1911

This is the story of China's economic internationalization in the century before the Communist conquest. The Maritime Customs Service was the most continuously important part of the modern Chinese state from the mid-nineteenth to the mid-twentieth centuries. It organized, promoted, and extracted revenues from China's growing foreign trade and became (by far) the most reliable source of income for the Qing court and the Republican regimes that followed it. Serving the interests of both Chinese and foreign states, it mediated the development of Shanghai and other great coastal cities and was a pioneer in China's modern financial sector. The eminent Cambridge historian, Hans van de Ven, has written this history in full for the first time, using an extraordinary array of Chinese and international sources. Today, as China looks to its pre-Communist past as a guide to its future, this is an important book. William C. Kirby, Harvard University

In this superbly readable, meticulously documented book, Van de Ven has written the best comprehensive account of a key institution on the frontiers of China's globalization in the modern era. Highly recommended. CHOICE

One of the most comprehensive and ambitious historical studies of the CMC to have been written in English.... Students of Chinese modern history cannot afford to overlook Breaking with the Past. Niv Horesh, The Journal of Asian Studies

Brimming with new insights and a remarkable richness of details, Breaking with the Past is a must read for all students of modern China. It offers a significant contribution to our understanding of the nature of imperialism in China and imperialism's impact on the dramatic political and economic transformations that characterize modern Chinese history. Margherita Zanasi, Harvard Journal of Asiatic Studies

[Breaking with the Past] is the clearest and most concise introduction to the CMC available. . . . An important contribution to the field. Richard S. Horowitz, The Historian

List of Illustrations
List of Graphs and Tables
Conventions
Introduction
1. The Birth of a Chameleon
2. Robert Hart's Panopticon
3. The Customs Service During the Self-Strengthening Movement, 1870–1895
4. The Rise of the Bond Markets: The Customs Service Becomes a Debt Collector, 1895–1914
5. Imperium in Imperio
6. Tariff Nation, Smugglers' Nation: The Customs Service in the Nanjing Decade, 1929–1937
7. Maintaining Integrity, 1937–1949
Epilogue: Echoes and Shadows
Notes
Bibliography
Index

Hans van de Ven is professor of modern Chinese history at Cambridge University. He has written extensively on China's military history and the history of the Chinese revolution.