Levinas, Derrida, and the Literary Afterlife of Religion 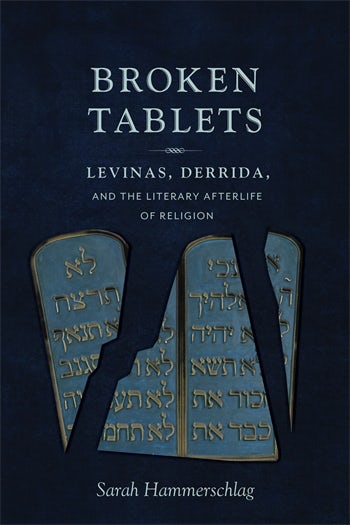 Levinas, Derrida, and the Literary Afterlife of Religion

Over a span of thirty years, twentieth-century French philosophers Emmanuel Levinas and Jacques Derrida held a conversation across texts. Sharing a Jewish heritage and a background in phenomenology, both came to situate their work at the margins of philosophy, articulating this placement through religion and literature. Chronicling the interactions between these thinkers, Sarah Hammerschlag argues that the stakes in their respective positions were more than philosophical. They were also political. Levinas's investments were born out in his writings on Judaism and ultimately in an evolving conviction that the young state of Israel held the best possibility for achieving such an ideal. For Derrida, the Jewish question was literary. The stakes of Jewish survival could only be approached through reflections on modern literature's religious legacy, a line of thinking that provided him the means to reconceive democracy. Hammerschlag's reexamination of Derrida and Levinas's textual exchange not only produces a new account of this friendship but also has significant ramifications for debates within Continental philosophy, the study of religion, and political theology.

This text offers a careful tracking of the intellectual dynamic between Derrida and Levinas, showing how a biographical and philosophical proximity coexisted with divergent views on religion and language. The ethical claim in Levinas's work is taken up by Derrida with gravity and irony. This careful historical and textual analysis allows us to see how these thinkers are bound up with one another even as Levinas presses philosophy toward religion and for Derrida, it is literature that is at the heart of sanctity and betrayal. At stake in this copious and attentive comparative work is the question, what is it to be a Jewish thinker? In the end, it appears that 'otherness' remains and persists as a broken tablet whose secret meaning is never fully revealed but hides out in public view. This is a welcome book, exacting and detailed, that gives us a story and a theory, a scene of enigmatic and provocative encounter between Levinas and Derrida. Judith Butler, University of California, Berkeley

A remarkably clear, incisive, and important book. It will be required reading for those interested in Levinas and Derrida and for all of those in the study of religion who wish to explore the relationship between ethics, politics, religion, and literature. Amy Hollywood, Harvard Divinity School

Deconstruction teaches us to question the integrity of binary oppositions, destabilizing conventional wisdom about the fixity of our categorical distinctions. But what if the field of contesting terms has three or more components? Beginning with the legacies of Derrida and Levinas, Hammerschlag investigates the oscillating similarities that united and dissimilarities that divided them. But then with her customary analytical acumen, she builds upon that exercise to explore their dynamic implications for the triangulated relationship between philosophy, religion, and literature, while complicating the argument still further by adding politics to the mix. The result is a remarkable, four-dimensional map of the rolling and jagged landscape of recent theoretical discourse. Martin Jay, University of California, Berkeley

From early texts such as Violence and Metaphysics to late works such as Adieu, Derrida sustained a powerful and philosophically productive bond with Levinas. But their differences, in matters of metaphysics and on the question of Jewish 'communitarianism,' were profound. In this searching and suggestive meditation, Hammerschlag asks us to consider anew this troubled affiliation and examines the dialectic of fidelity and betrayal that marked their intellectual friendship across the decades. Peter E. Gordon, Harvard University

Preface
Acknowledgments
Abbreviations
1. "What Must a Jewish Thinker Be?"
2. Levinas, Literature, and the Ruin of the World
3. Between the Jew and Writing
4. To Lose One's Head: Literature and the Democracy to Come
5. Literature and the Political-Theological Remains
Epilogue: "There Is Not a Pin to Choose Between Us"
Notes
Bibliography
Index

Sarah Hammerschlag is associate professor of religion and literature at the University of Chicago Divinity School and the author of The Figural Jew: Politics and Identity in Postwar French Thought (2010).