An Anthology of Premodern Sources 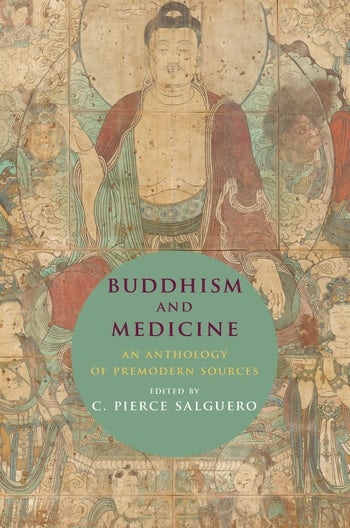 An Anthology of Premodern Sources

From its earliest days, Buddhism has been closely intertwined with medicine. Buddhism and Medicine is a singular collection showcasing the generative relationship and mutual influence between these fields across premodern Asia. The anthology combines dozens of English-language translations of premodern Buddhist texts with contextualizing introductions by leading international scholars in Buddhist studies, the history of medicine, and a range of other fields.

These sources explore in detail medical topics ranging from the development of fetal anatomy in the womb to nursing, hospice, dietary regimen, magical powers, visualization, and other healing knowledge. Works translated here include meditation guides, popular narratives, ritual manuals, spells texts, monastic disciplinary codes, recipe inscriptions, philosophical treatises, poetry, works by physicians, and other genres. All together, these selections and their introductions provide a comprehensive overview of Buddhist healing throughout Asia. They also demonstrate the central place of healing in Buddhist practice and in the daily life of the premodern world.

This anthology is a companion volume to Buddhism and Medicine: An Anthology of Modern and Contemporary Sources (Columbia, 2019).

C. Pierce Salguero’s Buddhism and Medicine is an amazingly rich and comprehensive collection of studies of texts and observed practices from all over the Asian lands where Buddhism’s manifestations made extensive contributions to the cultures. This book is a remarkable labor of scholarship and dedication—I cannot recommend it highly enough for anyone interested in Buddhism, the history of medicine, and the mutually fruitful interaction of the Asian medicine traditions and Western biomedical tradition that is happening all around us today. Robert Thurman, Jey Tsong Khapa Professor of Indo-Tibetan Buddhist Studies, Columbia University

This is a most unusual project. It will be a unique and valuable resource, both for students of Buddhism and for students of the history of medicine. There has never been anything like it in any language. Victor Mair, Professor of Chinese Language and Literature, University of Pennsylvania

A welcome addition to studies involving the healing traditions connected with Buddhism in South, Southeast, and East Asia. It will appeal to students of Buddhism, Asian medicine, and, importantly, the history of medicine. Kenneth Zysk, University of Copenhagen

Buddhism and Medicine: An Anthology of Premodern Sources is a remarkable collection of translations of important primary sources related to the theory and practice of medicine and healing from across Buddhist Asia . . . This is an essential addition to the library of anyone working in Asian religions. The sources it presents are simply fascinating to read and far too important to be ignored. Journal of the American Academy of Religion

Even well-informed scholars will find new and unfamiliar things in this rich and varied collection, and students are likely to encounter many texts to engage their interest and stimulate further study. I recommend this book highly. Reading Religion

The excitement readers will feel in encountering this material, and the impact this anthology will make...will
open the way for more work on Buddhist medicine, but more importantly it should also move us towards a more complex and complete view of Buddhism. Journal of Chinese Religions

This book manages to be both a major contribution to research scholarship and a wonderful textbook.
Almost all the translations are presented here for the first time, making this compendium an important
source for comparative studies and discovery in the history of medicine. . . . The book is beautifully edited,
designed, and printed and is also available through university libraries as an ebook. This is a remarkably
rich collection of materials for the history of medicine and of Buddhism. It will reward researchers and
students for many decades to come. Dominik Wujastyk, Isis: A Journal of the History of Science Society

C. Pierce Salguero is associate professor of Asian history and religious studies at Pennsylvania State University’s Abington College. He is the editor of Buddhism and Medicine: An Anthology of Modern and Contemporary Sources (Columbia, 2019) and the author of Translating Buddhist Medicine in Medieval China (2014) and Traditional Thai Medicine (2016).