An Anthology of Modern and Contemporary Sources 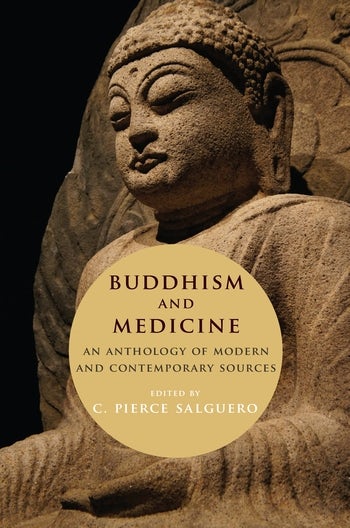 An Anthology of Modern and Contemporary Sources

Over the centuries, Buddhist ideas have influenced medical thought and practice in complex and varied ways in diverse regions and cultures. A companion to Buddhism and Medicine: An Anthology of Premodern Sources, this work presents a collection of modern and contemporary texts and conversations from across the Buddhist world dealing with the multifaceted relationship between Buddhism and medicine.

Covering the early modern period to the present, this anthology focuses on the many ways Buddhism and medicine were shaped by the forces of colonialism, science, and globalization, as well as ruptures and reconciliations between tradition and modernity. Editor C. Pierce Salguero and an international collection of scholars highlight diversity and innovation in the encounters between Buddhist and medical thought. The chapters contain a wide range of sources presenting different perspectives rooted in distinct times and places, including translations of published and unpublished documents and transcripts of ethnographic interviews as well as accounts by missionaries and colonial authorities and materials from the contemporary United States and United Kingdom. Together, these varied sources illustrate the many intersections of Buddhism and medicine in the past and how this nexus continues to be crucial in today’s global context.

Buddhism and Medicine is an invaluable sourcebook for the complex interplay between religion and medicine in Asia. It breaks ground on an astonishing range of topics and materials, and should be of interest to historians, anthropologists, and scholars of religion. Robert H. Sharf, D. H. Chen Distinguished Professor of Buddhist Studies, University of California, Berkeley

This excellent volume should be an essential resource for students and scholars in the fields of Buddhism and science, medicine, magic, and healing. By drawing on a wide variety of both textual and ethnographic sources from colonial critiques to modern Facebook posts from across the Buddhist world, the editor and his contributors have provided a rare view into the study of Buddhism and medicine that goes far beyond the contemporary study of mindfulness and well-being. Justin Thomas McDaniel, author of The Lovelorn Ghost and the Magical Monk: Practicing Buddhism in Modern Thailand

In this elegant sourcebook, C. Pierce Salguero and his collaborators demonstrate, with unprecedented scope, how very diverse are the world's Buddhisms and the world's medicines. Neither romanticizing nor dismissing the contributions of Asian religion to the history of healing, this project teaches us much about how humans have dealt with suffering, today and in the past. Judith Farquhar, Max Palevsky Professor Emerita of Anthropology, University of Chicago

Health and illness have always been concerns of practitioners. These translations of exemplary medical texts from the recent past demonstrate the enduring medical tradition within Buddhism. Not merely a religious tradition, or a system of doctrinal claims, or the texts that contain those claims and their philosophic rationales, Buddhism is effectively a culture in its own right. Richard K. Payne, author of Language in the Buddhist Tantra of Japan: Indic Roots of Mantra

Acknowledgments
Abbreviations
Introduction
Early Modernity
1. Buddhist Monastic Physicians’ Encounters with the Jesuits in Sixteenth- and Seventeenth-Century Japan, as Told from Both Sides, by Katja Triplett
2. On Sickness, Society, and the New Self in Early Edo Japan: Soshin’s Dharma Words (Seventeenth Century), by Katja Triplett
3. Buddhism and Scholarly Medicine in Seventeenth-Century China: Three Preaces to the Work of Yu Chang (1585–1664), by Volker Scheid
4. An Eighteenth-Century Mongolian Treatise on Smallpox Inoculation: Lobsang Tsültim’s “The Practice of Preparing Medicine for the Planting of Heaven’s White Flower” (1785), by Batsaikhan Norov, Vesna A. Wallace, and Batchimeg Usukhbayar
5. Psychosomatic Buddhist Medicine at the Dawn of Modern Japan: Hara Tanzan’s “On the Difference Between the Brain and the Spinal Cord” (1869), by Justin B. Stein
6. No Sympathy for the Devils: A Colonial Polemic Against Yakṣa Healing Rituals (1851), by Alexander McKinley
7. “Enveloped in the Deep Darkness of Ignorance and Superstition”: Western Observers of Buddhism and Medicine in the Kingdom of Siam in the Colonial Era, by C. Pierce Salguero
Ruptures and Reconciliations
8. Three Tibetan Buddhist Texts on the Dangers of Tobacco (Late Nineteenth to Twenty-First Century), by Joshua Capitanio
9. Buddhism and Biomedicine in Republican China: Taixu’s “Buddhism and Science” (1923) and Ding Fubao’s Essentials of Buddhist Studies (1920), by Gregory Adam Scott
10. Reconciling Scripture and Surgery in Tibet: Khyenrap Norbu’s Arranging the Tree Trunks of Healing (1952), by William A. McGrath
11. Healing Wisdom: An Appreciation of a Twentieth-Century Japanese Scientist’s Paintings of the Heart Sūtra, by Paula K. R. Arai
12. Mantras for Modernity: Nida Chenagtsang’s "Mantra Healing Is an Indispensable Branch of Tibetan Traditional Medicine” (2015) and “A Rough Explanation of How Mantras Work” (2003), by Ben P. Joffe
13. Science and Authority in Tibetan Medicine: Gönpokyap’s “Extraordinarily Special Features of the Human Body” (2008), by Jenny Bright
14. “Eat Less Meat to Save the World”: Monk Changlyu’s The Book of Diagnosis and Natural Foods (2014), by Emily S. Wu
Hybridities and Innovations
15. Taiwanese Tantra: Guru Wuguang’s Art of Yogic Nourishment and the Esoteric Path (1966), by Cody R. Bahir
16. Making a Modern Image of Jīvaka: “First Encounters with Jīvaka Komārabhacca, the High Guru of Healers and the Inspiration for Sculpting His Image” (1969), by Anthony Lovenheim Irwin
17. Gross National Happiness: Buddhist Principles and Bhutanese National Health Policy, by Charles Jamyang Oliphant of Rossie
18. Using Buddhist Resources in Post-disaster Japan: Taniyama Yōzō’s “Vihāra Priests and Interfaith Chaplains” (2014), by Levi McLaughlin
19. Medicine Wizards of Myanmar: Four Recent Facebook Posts, by Thomas Nathan Patton
Meditation and Mental Health
20. Naikan and Psychiatric Medicine: Takemoto Takahiro’s Naikan and Medicine (1979), by Clark Chilson
21. A Contemporary Shingon Priest’s Meditation Therapies: Selections from the Writings of Ōshita Daien (2006–2016), by Nathan Jishin Michon
22. Mindfulness in Westminster: The All-Party Parliamentary Group’s Mindful UK (2014), by Joanna Cook
23. Medicalizing Sŏn Meditation in Korea: An Interview with Venerable Misan Sŭnim, by Lina Koleilat
24. Misuses of Mindfulness: Ron Purser and David Loy’s “Beyond McMindfulness” (2013), by David L. McMahan
Crossing Boundaries
25. Rediscovering Living Buddhism in Modern Bengal: Maniklal Singha’s The Mantrayāna of Rārh (1979), by Projit Bihari Mukharji
26. Conversations with Two (Possibly) Buddhist Folk Healers in China, by Thomas David DuBois
27. Interview with a Contemporary Chinese American Healer, by Kin Cheung and C. Pierce Salguero
28. “We Need to Balance Out the Boisterous Spirits and Gods”: Buddhism in the Healing Practice of a Contemporary Korean Shaman, by Minjung Noh and C. Pierce Salguero
29. Among Archangels, Aliens, and Ascended Masters: Quan Yin Bodhisattva Joins the New Age Pantheon, by C. Pierce Salguero
Buddhist Healing in Practice
30. Buddhism and Resistance in Northern Thai Traditional Medicine: An Interview with an Unlicensed Thai Folk Healer, by Assunta Hunter
31. Burmese Alchemy in Practice: A Conversation with Master U Shein, by Céline Coderey
32. Mental Illness in the Sowa Rigpa Clinic: A Conversation with Dr. Teinlay P. Trogawa, by Susannah Deane
33. Biographical Interview with the Tantric Meditator Tshampa Tseten from Bhutan, with a Translation of His “Edible Letters,” by Mona Schrempf
34. Japanese Buddhist Women’s “Way of Healing,” by Paula K. R. Arai
35. Conversations About Buddhism and Health Care in Multiethnic Philadelphia, by C. Pierce Salguero
Appendix: Geographic Table of Contents
Glossary
References
List of Contributors
Index

C. Pierce Salguero is associate professor of Asian history and religious studies at Pennsylvania State University’s Abington College. He is the editor of Buddhism and Medicine: An Anthology of Premodern Sources (Columbia, 2017) and the author of Translating Buddhist Medicine in Medieval China (2014) and Traditional Thai Medicine (2016).