The Basij Militia and Social Control in Iran 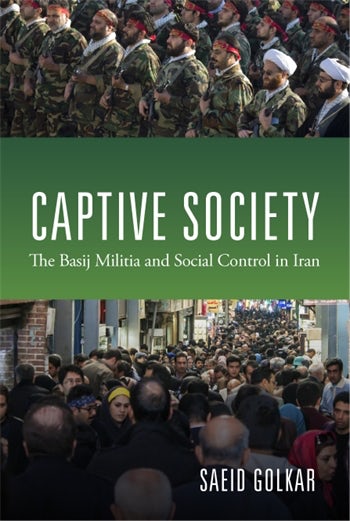 The Basij Militia and Social Control in Iran

Iran's Organization for the Mobilization of the Oppressed (Sazeman-e Basij-e Mostazafan), commonly known as the Basij, is a paramilitary organization used by the regime to suppress dissidents, vote as a bloc, and indoctrinate Iranian citizens. Captive Society surveys the Basij's history, structure, and sociology, as well as its influence on Iranian society, its economy, and its educational system. Saied Golkar's account draws not only on published materials—including Basij and Revolutionary Guard publications, allied websites, and blogs—but also on his own informal communications with Basij members while studying and teaching in Iranian universities as recently as 2014. In addition, he incorporates findings from surveys and interviews he conducted while in Iran.

This is the first full-length study of this critical organization in the Iranian power structure. Saeid Golkar provides a comprehensive account of the Basij's organizational structure, insight into the social background of its membership, the training and indoctrination of the members, and the Basij's extensive security, watchdog, and propaganda role in Iranian society. Shaul Bakhash, George Mason University

There is a dire need for a reliable survey of this important institution, and this book fills the vacuum. Ahmad Ashraf, Columbia University

Each page all the more chilling. BackChannels

Saeid Golkar is a lecturer in Middle East and North African studies at Northwestern University and a visiting fellow for Iran policy at the Chicago Council on Global Affairs. He was a fellow at the Woodrow Wilson International Center for Scholars from 2013 to 2014.