A New Geology for the Twenty-First Century 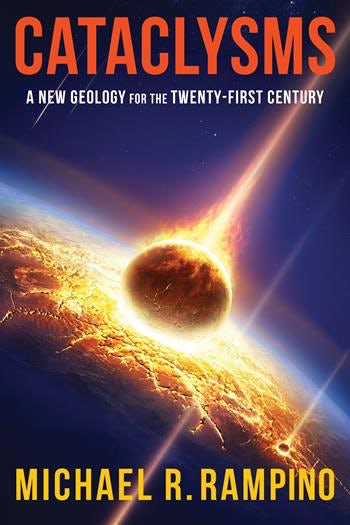 A New Geology for the Twenty-First Century

In 1980, the science world was stunned when a maverick team of researchers proposed that a massive meteor strike had wiped the dinosaurs and other fauna from the Earth 66 million years ago. Scientists found evidence for this theory in a “crater of doom” on the Yucatán Peninsula, showing that our planet had once been a target in a galactic shooting gallery. In Cataclysms, Michael R. Rampino builds on the latest findings from leading geoscientists to take “neocatastrophism” a step further, toward a richer understanding of the science behind major planetary upheavals and extinction events.

Rampino recounts his conversion to the impact hypothesis, describing his visits to meteor-strike sites and his review of the existing geological record. The new geology he outlines explicitly rejects nineteenth-century “uniformitarianism,” which casts planetary change as gradual and driven by processes we can see at work today. Rampino offers a cosmic context for Earth’s geologic evolution, in which cataclysms from above in the form of comet and asteroid impacts and from below in the form of huge outpourings of lava in flood-basalt eruptions have led to severe and even catastrophic changes to the Earth’s surface. This new geology sees Earth’s position in our solar system and galaxy as the keys to understanding our planet’s geology and history of life. Rampino concludes with a controversial consideration of dark matter’s potential as a triggering mechanism, exploring its role in heating Earth’s core and spurring massive volcanism throughout geologic time.

Cataclysms is the most useful, well-written, and not overly technical summary of neocatastrophism since the Alvarez team published their initial work in the early 1980s. Rampino paints a lively picture of how work in the area of geoscience is actually done—aided and abetted to good purpose by copious illustrations. Niles Eldredge, author of Eternal Ephemera: Adaptation and the Origin of Species from the Nineteenth Century Through Punctuated Equilibria and Beyond

As late as 1964, it was hard to find a scientist who believed that crashing meteorites, rather than volcanism, had caused craters on the moon and the earth. In this provocative book, Michael Rampino tantalizes us with his examination of the relationship between astronomy and geology, which he argues could become truly predictive of the past and future. Cataclysms takes us far out, indeed. But if there is one lesson from the history of geology, it is that we should listen to those like Rampino who think outside the box—or even outside the solar system. James Powell, author of Four Revolutions in the Earth Sciences: From Heresy to Truth

A very readable and broad-ranging inquiry from a personal perspective into the philosophical underpinnings of historical geology. Rampino advances the argument that catastrophism, rather than being dismissible as an arbitrary explanation of major events in the story of life on Earth, is a predictable consequence of the galactic pacing of impacts of large extraterrestrial objects, producing periodic bouts of mass extinctions. Dennis Kent, Rutgers University

In this fast-moving, eminently readable first-hand narrative, Rampino paints a stark contrast between conventional gradualist interpretations of earth history and a new fusion of earth science and astronomy in which powerful forces shape our planet's history with periodic catastrophes from above and within. Highly controversial, Rampino persuasively ties together seemingly unrelated empirical geological discoveries and astrophysical theory into a scientific adventure accessible to nonspecialists as well as experienced scientists. Paul E. Olsen, Arthur D. Storke Memorial Professor of Earth and Environmental Sciences, Lamont–Doherty Earth Observatory at Columbia University

Rampino has pulled off the clever trick of producing a book about geology that will appeal to serious professionals and weekend rockhounds alike—and of course to students and teachers too. His crisp narrative matches the dynamism of the science it explains. Dan Fagin, author of the Pulitzer Prize-winning Toms River: A Story of Science and Salvation

Should be read by everyone with even a casual interest in the history of our planet. David Eicher, Astronomy Magazine

Michael R. Rampino is a professor of biology and environmental studies at New York University. He has been a consultant for NASA and is the editor of Climate: History, Periodicity, and Predictability (1988) and coauthor of Origins of Life in the Universe (2008).