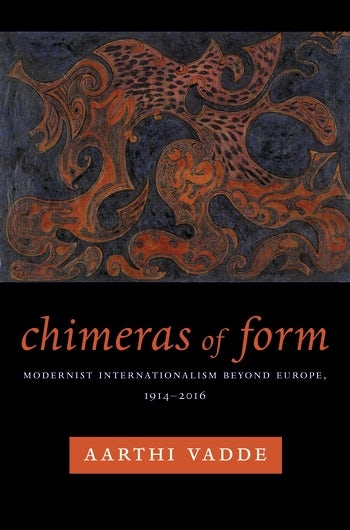 In the years following World War I, the “international” emerged as a distinct scale of political and cultural focus. Internationalisms proliferated in kind as writers and thinkers sought to imagine modes of cooperation that would balance transnational solidarities with national sovereignty. While so-called political realists across the twentieth century have regarded such attempts as wishful thinking, Aarthi Vadde argues that the negotiation of wishing and thinking is at the very heart of internationalism. In Chimeras of Form, she shows why modernist literary form is essential to understanding the aspirational and analytical force of internationalism in and beyond Europe.

Major writers such as Rabindranath Tagore, James Joyce, Claude McKay, George Lamming, Michael Ondaatje, and Zadie Smith use modernist strategies to reshape how readers think about the cohesion and interrelation of political communities in the wake of empire. Vadde lucidly explains how their formal experiments with the novel, short story, poetry, and political essay contribute to and sometimes even anticipate debates in postcolonial theory and cosmopolitanism. She reads Joyce’s use of asymmetrical narratives as a way to ask questions about international camaraderie, and demonstrates how the “plotless” works of McKay and Lamming upturn ideas of citizenship and diasporic alienation. Her analysis of twenty-first-century writers Smith and Shailja Patel shows how ongoing conflicts around migration, displacement, and global economic inequality link modernist, postcolonial, and contemporary traditions of literature. Vadde brings these traditions together to reveal the dual nature of internationalism as an ambition, possibly a chimeric one, and an actual political discourse vital to understanding our present moment.

Vadde has written a supple, incisive, and richly thoughtful book. In smart and sophisticated readings, she rigorously thinks through modernist and postcolonial fiction's relation to the ingredients it collages, and she brilliantly illuminates such fiction's relation to an increasingly globalized world. Jahan Ramazani, author of Poetry and Its Others: News, Prayer, Song, and the Dialogue of Genres

Chimeras of Form contributes richly and originally to the current remapping of modernism within non-eurocentric, international, and postcolonial coordinates across the twentieth century. Vadde eloquently argues that many modernist texts consciously enter the breach between these apparent oppositions. This book is a rare achievement, and one that will prompt new questions and productive debates in the field of modernist studies. Laura Doyle, author of Freedom's Empire: Race and the Rise of the Novel in Atlantic Modernity, 1640–1940

With extraordinary subtlety and flair, Aarthi Vadde charts modernist internationalism as a persistent and shifting impulse toward experimentation in fictions that 'stretch the range of the sayable' in their chimeric, even confounding, depictions of the complexities of social life. Her deft readings will transform the way we understand the unexpected routes between modernism and postcolonialism to the point where those terms can no longer be taken as distinct categories tethered to period and geography. Brent Hayes Edwards, author of The Practice of Diaspora: Literature, Translation, and the Rise of Black Internationalism

Vadde's expansive, sophisticated, and timely analysis unsettles conventional divisions between formalism and postcolonialism, nationalism and cosmopolitanism, realism and utopianism, and Europe and its others. Through masterful readings, she demonstrates how in form and content Tagore, Joyce, McKay, Lamming, Ondaatje, and Zadie Smith disrupt given understandings of territory, community, unity, and belonging. Vadde persuasively reveals the importance of literary modernism for imagining nonnational forms of sociability, solidarity, and citizenship. Gary Wilder, author of Freedom Time: Negritude, Decolonization, and the Future of the World

Vadde's contribution is her remarkable insight into the 'chimeral' forms of global modernism. These forms don't flaunt triumphal cosmopolitanism in the face of outmoded nationalisms. Rather they foreground the artificial and recycled style of posttraumatic globalization—after the ongoing displacements of the previous century. Such global coexistence is precarious and makeshift, and also more livable. Leela Gandhi, author of Affective Communities: Anticolonial Thought, Fin-de-Siècle Radicalism, and the Politics of Friendship

A deft intervention into the expansion of modernist internationalism beyond its conventional Euro-American trajectories. Taiwo Adetunji Osinubi, Cambridge Journal of Postcolonial Literary Inquiry

Chimeras of Form is a sophisticated work of scholarship that explicitly engages with topics that should be of interest to scholars of Joyce and modernism more broadly, both pre-World War II modernism as well as after, for those willing to open modernism’s boundaries to the contemporary literature Vadde examines. At its best, Chimeras of Form offers a pathway to bringing literature and literary study to bear on some of the most pressing problems of our time—a lofty and worthy goal. Patrick Herald, James Joyce Quarterly

Aarthi Vadde is associate professor of English at Duke University.