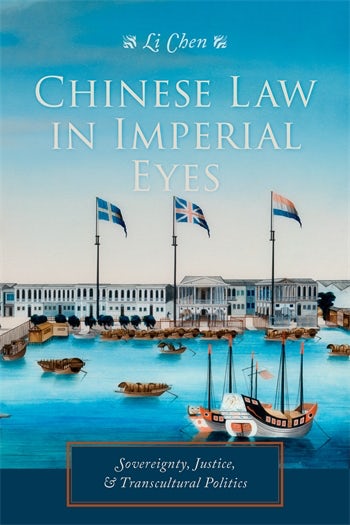 How did American schoolchildren, French philosophers, Russian Sinologists, Dutch merchants, and British lawyers imagine China and Chinese law? What happened when agents of presumably dominant Western empires had to endure the humiliations and anxieties of maintaining a profitable but precarious relationship with China? In Chinese Law in Imperial Eyes, Li Chen provides a richly textured analysis of these related issues and their intersection with law, culture, and politics in the eighteenth and nineteenth centuries.

Using a wide array of sources, Chen's study focuses on the power dynamics of Sino-Western relations during the formative century before the First Opium War (1839-1842). He highlights the centrality of law to modern imperial ideology and politics and brings new insight to the origins of comparative Chinese law in the West, the First Opium War, and foreign extraterritoriality in China. The shifting balance of economic and political power formed and transformed knowledge of China and Chinese law in different contact zones. Chen argues that recovering the variegated and contradictory roles of Chinese law in Western "modernization" helps provincialize the subsequent Euro-Americentric discourse of global modernity.

Chen draws attention to important yet underanalyzed sites in which imperial sovereignty, national identity, cultural tradition, or international law and order were defined and restructured. His valuable case studies show how constructed differences between societies were hardened into cultural or racial boundaries and then politicized to rationalize international conflicts and hierarchy.

Just when we thought no one could offer any new approach to the subject of the Sino-Western encounter during the early modern period, this book pulls us back in. Li Chen sets a new standard for any future study on this topic. Zvi Ben-Dor Benite, New York University

Li Chen makes a gift of his expertise in legal history to readers of every level. He not only reinterprets monumental historical episodes in the relations between China and Europe but also builds on this platform a cultural history of European perceptions of punishment, justice, and state prerogative in China. Anybody considering legal history an arcane or marginal element of late Qing history and its international relations will have to reconsider. Pamela Kyle Crossley, Dartmouth College

Chinese Law in Imperial Eyes is a landmark contribution to the emerging field of Chinese law and cultural studies. Li Chen's sophisticated analyses and wide-ranging archive illuminate the complex and fascinating encounter between Chinese and European legal traditions in the eighteenth and nineteenth centuries. Teemu Ruskola, Emory University School of Law

The discussion of the conceptual differences between Chinese and Western legal orders, public and private, codified and non-codified law is so fascinating and fundamental that it stands as one of the signal contributions of the volume. . . . Sets a very high bar for new studies, and will be a standard for many years to come. American Historical Review

Extensively researched and well-written.... The aspiration of the author to restore the centrality of legal matters to Sino-Western interactions is clearly achieved. H-Empire

Engages different discursive levels and reveals the evolution and diffusion of knowledge of the Chinese law, from rational to sentimental perspectives. Frontiers of History in China

Chen's Chinese Law in Imperial Eyes, not only provides a much needed and significant contribution, but could be regarded as quite the masterpiece, outlining the importance of legal discourses to Sino-Western encounters from the eighteenth century onwards. Chinese Historical Review

Li Chen has delivered a carefully crafted and highly articulate study that will soon be required reading for students of comparative law, imperialism, and Sino-western relations in general. Journal of Chinese History

A confident exemplar of a now-flourishing field. English Historical Review

In this nuanced and convincing study, Li Chen not only probes why and how oversimplified, reductive culturalist interpretations of Sino-Western legal collisions in the eighteenth and nineteenth centuries became dominant, but also pushes past the discourses of Euro-Americentric hegemonic creep typically found in revisionist scholarship. Journal of East Asian Studies

This is a critical book for understanding a mutually influential relationship, as both Chinese and Western empires struggled to create their own legal identities and forge stable international practices. . . . With this book, Li Chen has equipped historians with an essential vision of the origins of longstanding presumptions about Chinese law. Frontier of Literary Studies in China

Acknowledgments
Introduction
1. Imperial Archives and Historiography of Western Extraterritoriality in China
2. Translation of the Qing Code and Colonial Origins of Comparative Chinese Law
3. Chinese Law in the Formation of European Modernity
4. Sentimental Imperialism and the Global Spectacle of Chinese Punishments
5. Law and Empire in the Making of the First Opium War
Conclusion
List of Abbreviations
Notes
Glossary
Bibliography
Index

Li Chen is associate professor at the University of Toronto and founding president of the International Society for Chinese Law and History. He has published on late imperial and modern Chinese law and society, Sino-Western encounters, and international law and empire, including a volume coedited with Madeleine Zelin called Chinese Law: Knowledge, Practice and Transformation, 1530s–1950s.