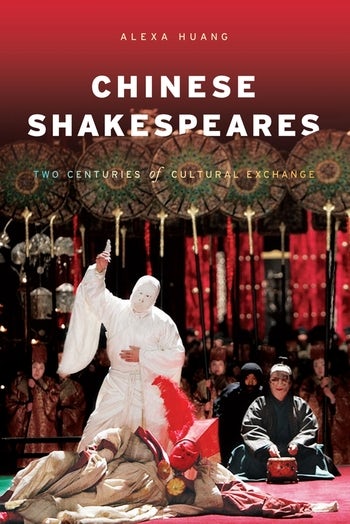 For close to two hundred years, the ideas of Shakespeare have inspired incredible work in the literature, fiction, theater, and cinema of China, Taiwan, and Hong Kong. From the novels of Lao She and Lin Shu to Lu Xun's search for a Chinese "Shakespeare," and from Feng Xiaogang's martial arts films to labor camp memoirs, Soviet-Chinese theater, Chinese opera in Europe, and silent film, Shakespeare has been put to work in unexpected places, yielding a rich trove of transnational imagery and paradoxical citations in popular and political culture.

Chinese Shakespeares is the first book to concentrate on both Shakespearean performance and Shakespeare's appearance in Sinophone culture and their ambiguous relationship to the postcolonial question. Substantiated by case studies of major cultural events and texts from the first Opium War in 1839 to our times, Chinese Shakespeares theorizes competing visions of "China" and "Shakespeare" in the global cultural marketplace and challenges the logic of fidelity-based criticism and the myth of cultural exclusivity. In her critique of the locality and ideological investments of authenticity in nationalism, modernity, Marxism, and personal identities, Huang reveals the truly transformative power of Chinese Shakespeares.

The best of a new generation of scholarship based on rigorous archival research that moves the field in significant new directions. The China Quarterly

Among the most innovative monographs this year is Chinese Shakespeares. Particularly exciting is Huang's emphasis on the two-way exchange between Shakespeare and China. His examples are temporally, geographically, and ideologically diverse. By looking to the local, Huang is able to question the terms of current cross-cultural discourse—to ask whether hybridity is necessarily progressive, to make an important distinction between universalizing and globalizing impulses, to insist on the plurality and individuality of any given audience. SEL Studies in English Literature 1500-1900

In the recent spate of scholarship on Shakespeare... Huang's volume stands out as being particularly valuable,... offering a model for theorizing cross-cultural entanglements that goes beyond its specific subject matter. Choice

A splendid book,... well written and illustrated. Highly infused with theory, it adds to our understanding of the ways in which great cultures interpenetrate and enrich each other. It is a truly path-breaking book. I recommend it strongly not only to all those interested in Chinese culture but those interested in theatre and drama and the many ways in which the performing arts inform societies and cultures. MCLC: Modern Chinese Literature and Culture

This book maps new territory for the most promising project in comparative literature today.... Remarkable not only for its sophistication but also for its scholarly depth, Chinese Shakespeares is a landmark in the renewal of comparative literature as a discipline. citation from the Modern Language Association's Aldo and Jeanne Scaglione Prize for Comparative Literary studies

Chinese Shakespeares is a critically sophisticated study that is grounded in firsthand knowledge of every major stage production, film, and critical article on the subject of Shakespeare in China. Charles Ross, Comparative Literature Studies

A fascinating and important study The Year's Work in English Studies

His keen observations on intercultural exchange and critique of prevailing discourses make the book relevant not only to scholars and students of sinophone Shakespeare but also to Shakespeareans exploring the Bard's afterlife in various fields: dissemination, modernization, localization, translation, transplantation, appropriation, and intercultural or cross-media adaptation. Bi-qi Beatrice Lei, Modern Language Quarterly

Alexander Huang has done a masterly job.... The book gives us an excellent picture of the various takes on Shakespeare, as well as inroads to understanding the complicated national, global, and personal meanings that are part of the Shakespeare phenomenon. Wendy Larson, Modern Philology

Commended, 2010 Honorable Mention Joe A. Callaway Prize for the Best Book on Drama or Theatre

Alexa Huang is Professor of English, International Affairs, and East Asian Languages and Cultures at George Washington University where she co-founded and co-directs the Digital Humanities Institute. Her other books include Shakespeare and the Ethics of Appropriation.