City of Workers, City of Struggle

Edited by Joshua B. Freeman 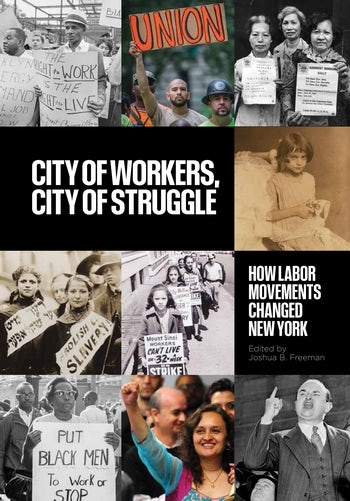 City of Workers, City of Struggle

Edited by Joshua B. Freeman

From the founding of New Amsterdam until today, working people have helped create and re-create the City of New York through their struggles. Starting with artisans and slaves in colonial New York and ranging all the way to twenty-first-century gig-economy workers, this book tells the story of New York’s labor history anew.

City of Workers, City of Struggle brings together essays by leading historians of New York and a wealth of illustrations, offering rich descriptions of work, daily life, and political struggle. It recounts how workers have developed formal and informal groups not only to advance their own interests but also to pursue a vision of what the city should be like and whom it should be for. The book goes beyond the largely white, male wage workers in mainstream labor organizations who have dominated the history of labor movements to look at enslaved people, indentured servants, domestic workers, sex workers, day laborers, and others who have had to fight not only their masters and employers but also labor groups that often excluded them. Through their stories—how they fought for inclusion or developed their own ways to advance—it recenters labor history for contemporary struggles. City of Workers, City of Struggle offers the definitive account of the four-hundred-year history of efforts by New York workers to improve their lives and their communities.

In association with the exhibition City of Workers, City of Struggle: How Labor Movements Changed New York at the Museum of the City of New York

City of Workers, City of Struggle reveals how early colonists, later immigrants, and rural migrants became central to New York City’s manufacturing, trading, and financial industries. Evocatively illustrated, each chapter offers tales of mobilization and resistance experienced by diverse and ever-changing populations of New Yorkers. Together these chapters provide powerful insights into the interdependence of labor and capital. Alice Kessler-Harris, coeditor of Democracy and the Welfare State: The Two Wests in the Age of Austerity

Written by some of the country's most talented historians, this lavishly illustrated and impressively argued book inverts the usual pattern of viewing New York City's history from the point of view of the rich and powerful. It makes clear that the struggles of workers—artisans and domestic laborers, sailors and garment workers, public employees and men and women in health care—were essential to making New York a bastion of progressivism. No account of history could be more relevant to our current moment. Eric Foner, Columbia University

At last! A pathbreaking history of New York laborers that runs from colonial-era artisans and slaves to today’s alt-labor organizers. Broadly conceived, it covers not only craft and industrial and white collar workers, but home workers, maritime workers, public workers, sex workers, health care workers, domestic workers, and criminals in the underground economy. It attends not only to unionization, but to the evolving nature of work, housing, leisure, politics, and culture. Vividly written, and copiously illustrated, City of Workers, City of Struggle is a superb and timely introduction to Gotham’s working people, past and present. Mike Wallace, coauthor of Gotham: A History of New York City to 1898

Joshua B. Freeman is Distinguished Professor of History at Queens College and the Graduate Center of the City University of New York. His books include Behemoth: A History of the Factory and the Making of the Modern World (2018); American Empire, 1945–2000: The Rise of a Global Power; the Democratic Revolution at Home (2012); and Working-Class New York: Life and Labor Since World War II (2000).