Memory in the Age of Fast Capitalism 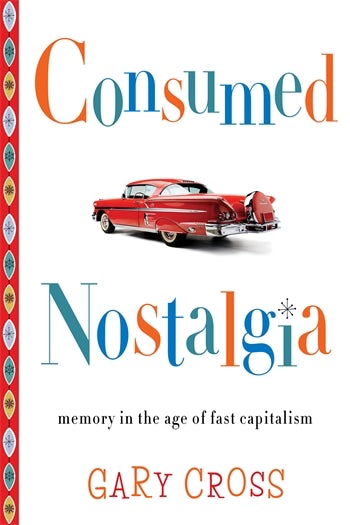 Memory in the Age of Fast Capitalism

Nostalgia isn't what it used to be. For many of us, modern memory is shaped less by a longing for the social customs and practices of the past or for family heirlooms handed down over generations and more by childhood encounters with ephemeral commercial goods and fleeting media moments in our age of fast capitalism. This phenomenon has given rise to communities of nostalgia whose members remain loyal to the toys, television, and music of their youth. They return to the theme parks and pastimes of their upbringing, hoping to reclaim that feeling of childhood wonder or teenage freedom.

Consumed nostalgia took definite shape in the 1970s, spurred by an increase in the turnover of consumer goods, the commercialization of childhood, and the skillful marketing of nostalgia. Gary Cross immerses readers in this fascinating and often delightful history, unpacking the cultural dynamics that turn pop tunes into oldies and childhood toys into valuable commodities. He compares the limited appeal of heritage sites such as Colonial Williamsburg to the perpetually attractive power of a Disney theme park and reveals how consumed nostalgia shapes how we cope with accelerating change.

Today nostalgia can be owned, collected, and easily accessed, making it less elusive and often more fun than in the past, but its commercialization has sometimes limited memory and complicated the positive goals of recollection. By unmasking the fascinating, idiosyncratic character of modern nostalgia, Cross helps us better understand the rituals of recall in an age of fast capitalism.

A provocative, interesting, well-researched, and well-written work that will make an important contribution to studies of memory and modern culture and will illuminate Americans' evolving relationships with their past. Susan Matt, Weber State University, author of Homesickness: An American History

Retro is big business. Nostalgia fuels demand for oldies music, muscle cars, television reruns, vintage fashion, and a dizzying array of collectibles and kitsch. In a history that is stunning in its breadth and insights, Gary Cross, the preeminent historian of consumer culture, explores the allure of past fads and fashions and examines nostalgia in its diverse forms, from the toys, dolls, popular music, and television that recapture a lost youth to the heritage museums and theme parks that act as sites of collective memory. Americans may consider themselves a forward-looking people, but their nostalgia for remnants of the past remains intense. Steven Mintz, University of Texas at Austin, author of The Prime of Life: A History of Modern Adulthood

This informative look at collecting and consumerism is recommended for researchers of history, memory, cultural studies, and consumption. Library Journal

An important contribution to the field of nostalgia studies, as it ruminates on the materiality of longing for the past. International Media and Nostalgia Network

An important addition to the growing body of literature on nostalgia. Tobias Becker, H-Soz-u-Kult

Cross has written a provocative study, which will have broad appeal not only to scholars but to all of us in North America who have grown up in the age of fast capitalism. Sarah Elvins, Canadian Journal of History Vol. 52, no. 1

Introduction. Our Nostalgic Novelty Culture
1. Guys Toys and "Girls" Dolls
2. Lovin' That '57 Chevy (or Whatever Was Your Favorite Car at Seventeen)
3. (Re-)Living That Golden Decade
4. Leaving It to Beaver and Retro TV
5. Give Me That Old-Time Radio
6. Dilemmas of Heritage in an Era of Consumed Nostalgia
7. Pilgrimages, Souvenirs, and Memory at Disney
Conclusion. Where We've Been, Where We Might Go
Notes
Index

Gary Cross is Distinguished Professor of Modern History at Pennsylvania State University. He is the author of a dozen historical books on childhood, consumption, technology, popular culture, and work, notably Men to Boys: The Making of Modern Immaturity; The Cute and the Cool: Wondrous Innocence and Modern American Children's Culture; and An All-Consuming Century: Why Commercialism Won in Modern America.