The History of an Unexpected Miracle 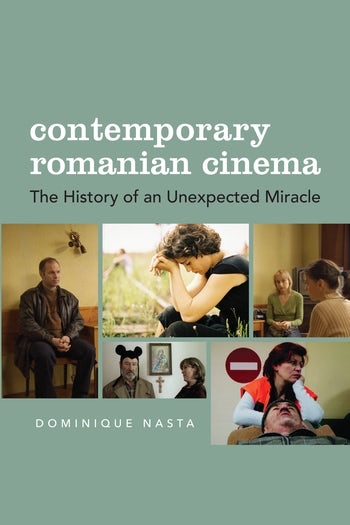 The History of an Unexpected Miracle

Over the last decade, audiences worldwide have become familiar with highly acclaimed films from the Romanian New Wave such as 4 Months, 3 Weeks and 2 Days (2007), The Death of Mr. Lazarescu (2005), and 12:08 East of Bucharest (2006). However, the hundred or so years of Romanian cinema leading to these accomplishments have been largely overlooked. This book is the first to provide in-depth analyses of essential works ranging from the silent period to contemporary productions. In addition to relevant information on historical and cultural factors influencing contemporary Romanian cinema, this volume covers the careers of daring filmmakers who approached various genres despite fifty years of Communist censorship. An important chapter is dedicated to Lucian Pintilie, whose seminal work, Reconstruction (1969), strongly inspired Romania's 21st-century innovative output. The book's second half closely examines both the 'minimalist' trend (Cristian Mungiu, Cristi Puiu, Corneliu Porumboiu, Radu Muntean) and the younger, but no less inspired, directors who have chosen to go beyond the 1989 revolution paradigm by dealing with the complexities of contemporary Romania.

Informative, detailed, and written with clearly evident passion, this volume provides an engaging account of contemporary Romanian cinema and its dramatic transformation from being one of the least well-known film cultures in Europe to an almost phoenix-like renaissance after the fall of Communism. By exploring not only nationally specific contexts, but also issues such as co-productions, exile, diaspora, and other forms of global circulation, Nasta demonstrates that far from being a peripheral phenomenon, Romanian cinema has a central place within discussions of world cinema. Tim Bergfelder, University of Southampton

Providing historical context and bringing to light hidden gems, this compelling and extremely well-documented book draws connections between Romanian cinema's past and present, answering the most difficult question: how was the miracle of the New Wave possible? Nasta's analysis is simply the best work written so far on this subject. The Romanian cinema, old and new, rightfully deserves this considered treatment. Mihai Chirilov, Artistic Director, Transylvania International Film Festival

Every national cinema should envy Romania for having someone like Dominique Nasta to chronicle its history. This book, like Romanian cinema itself, provides unexpected discoveries decade to decade, while leading us authoritatively and dramatically to the recent masterpieces that have put Romania firmly on the cinephile's map. This will be the definitive book on this important cinema. Dudley Andrew, Yale University

In her attempt to explore the inner mechanisms of unprecedented cinematic success, Dominique Nasta does not suppress her Romanian insights but manages to keep a necessary distance to guarantee an academic rigorousness in this scrutiny of the Romanian cinema after 2000. The pertinent detection of the roots of the "new wave", the judicious delimitations of its stages, the detailed analyses of those films which brought a worldwide celebrity to this rebirth, all make Contemporary Romanian Cinema a unique book about a unique phenomenon. Cristina Corciovescu, Film Critic

Contemporary Romanian Cinema is both impressive and worthwhile, and it marks a major contribution to the study of world cinema. Brandon Konecny, Film International

Critically astute, well informed and engagingly written, this book provides a fascinating narrative of contemporary Romanian cinema and its rise to international prominence since the fall of communism... Nasta has written a bopk that is itself something of a miracle. CHOICE

Dominique Nasta's overview of hte history of Romanian cinema is a welcome one. Film Criticism

Acknowledgements
Preface
Introduction
1. Difficult Beginnings
2. Bright Intervals: Romania's Short-lived Thaw
3. Romanian Cinema in the 1970s: Versatility on the Menu
4. Dan Piţa: A Filmmaker for All Seasons
5. Mircea Daneliuc: Romanian Cinema's Rebel with a Cause
6. The 1989 Moment: Film and History in the Early 1990s
7. Through a Glass, Darkly: Lucian Pintilie as Past and Present Role Model
8. The Films of Nae Caranfil: A Taste of Turn-of-the-Century Sophisticated Comedy
9. Short Films on the Crest of the New Wave
10. Less is More: Puiu, Porumboiu, Muntean and the Impact of Romanian Film Minimalism
11. The 4, 3, 2 Paradigm: Cristian Mungiu's Large-scale Phenomenon
12. Making Films for Wider Audiences: Romanian Cinema Turns Global
13. Romanian Exilic and Diasporic Cinema: The Case of Radu Gabrea
Conclusion
Notes
Filmography
Bibliography
Index

Dominique Nasta is professor of film studies at the Université Libre de Bruxelles. She has published two books, Meaning in Film (1991) and New Perspectives in Sound Studies (with Didier Huvelle, 2004), as well as numerous essays and encyclopedia chapters on Romanian films and directors.