Contingency and the Limits of History

How Touch Shapes Experience and Meaning 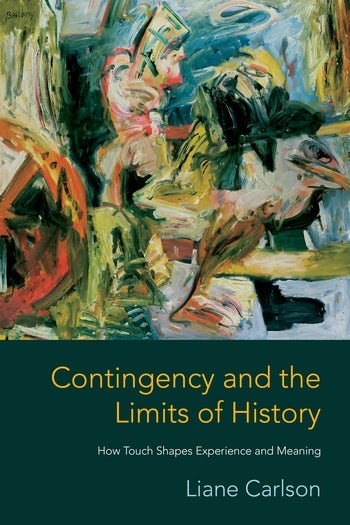 Contingency and the Limits of History

How Touch Shapes Experience and Meaning

Central to the historicizing work of recent decades has been the concept of contingency, the realm of chance, change, and the unnecessary. Following Nietzsche and Foucault, genealogists have deployed contingency to show that all institutions and ideas could have been otherwise as a critique of the status quo. Yet scholars have spent very little time considering the genealogy of contingency itself—or what its history means for its role in politics.

In Contingency and the Limits of History, Liane Carlson historicizes contingency by tying it to its theological and etymological roots in “touch,” contending that much of its critical, disruptive power is specific to our current historical moment. She returns to an older definition of contingency found in Christian theology that understands it as the lot of mortal creatures, who suffer, feel, bleed, and change, in contrast to a necessary, unchanging, impassible God. Far from dying out, Carlson reveals, this theological past persists in continental philosophy, where thinkers such as Novalis, Schelling, Merleau-Ponty, and Serres have imagined contingency as a type of radical destabilization brought about by the body’s collision with a changing world. Through studies of sickness, loneliness, violation, and love, she shows that different experiences of contingency can lead to dramatically dissimilar ethical and political projects. A strikingly original reconsideration of one of continental philosophy and critical theory’s most cherished concepts, this book reveals the limits of historicist accounts.

Liane Carlson employs deft literary analysis and sensibility in a philosophical reflection that is both original and important. Wayne Proudfoot, author of Religious Experience

In response to influential currents of genealogical critique that would denaturalize our major concepts—such as religion—by highlighting their historical contingency, Liane Carlson advances an alternative understanding of contingency, and of religion, in terms of our vulnerable bodies, our fluid emotions, and our experience of touch as that which can make, or unmake, a world. While grounded in a scholarship whose range and depth are impressive, Carlson's work engages more fundamentally in a constructive thinking—about the character and meaning of finite human existence—that seems to me, in its lucidity, nuance, honesty, and existential investment, a notable and welcome contribution. Thomas A. Carlson, author of With the World at Heart: Studies in the Secular Today

In this genuinely interdisciplinary study, Liane Carlson argues compellingly that the history of Christian theology is necessary for understanding modern debates about the historical, political, ethical, and existential meanings of contingency. With special attention to the role of human suffering within these debates, Carlson grapples with fundamental questions about time, the body, and human finitude. Anyone interested in the study of religion as well as the humanities more broadly has much to learn from this elegantly written, deeply learned, and truly original book. Leora F. Batnitzky, Ronald O. Perelman Professor of Jewish Studies, Princeton University

Delicately wrought, fiercely argued, and magisterial in scope, Liane Carlson's work analyzes the contingency of the 'contingency' animating our most beloved theories and methods. The result is politically savvy, ethically pressing, and absurdly readable—honestly, I don't think it's possible to overstate the significance or painful beauty of this book. Mary-Jane Rubenstein, author of Pantheologies: Gods, Worlds, Monsters

Liane Carlson is the Henry R. Luce Initiative on Religion in International Affairs Post-Doctoral Fellow at the Center for Religion and Media at New York University.