A Moment in World History 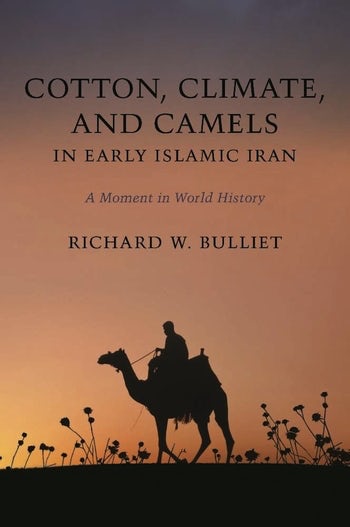 A Moment in World History

A boom in the production and export of cotton made Iran the richest region of the Islamic caliphate in the ninth and tenth centuries. Yet in the eleventh century, Iran's impressive agricultural economy entered a steep decline, bringing the country's primacy to an end.

Richard W. Bulliet advances several provocative theses to explain these hitherto unrecognized historical events. According to Bulliet, the boom in cotton production directly paralleled the spread of Islam, and Iran's agricultural decline stemmed from a significant cooling of the climate that lasted for over a century. The latter phenomenon also prompted Turkish nomadic tribes to enter Iran for the first time, establishing a political dominance that would last for centuries.

Substantiating his argument with innovative quantitative research and recent scientific discoveries, Bulliet first establishes the relationship between Iran's cotton industry and Islam and then outlines the evidence for what he terms the "Big Chill." Turning to the story of the Turks, he focuses on the lucrative but temperature-sensitive industry of cross-breeding one-humped and two-humped camels. He concludes that this unusual concatenation of events had a profound and long-lasting impact not just on the history of Iran but on the development of world affairs in general.

Cotton, Climate, and Camels in Early Islamic Iran is a work of great originality and a major innovation in the historiography of Iran and surrounding regions. Carter Findlay, Ohio State University, and author The Turks in World History

An excellent book that stands out for its innovative and perceptive research. Ehsan Yarshater, editor of Encyclopaedia Iranica

In an extraordinary mix of erudite scholarship and elegant presentation, Richard W. Bulliet reveals Abbasid Iran's central place in world history during two key centuries. His skill in unlocking the balance of structural change and human agency makes this book a brilliant model for all students of social change. Patrick Manning, University of Pittsburgh, and author of The African Diaspora: A History Through Culture

This book is not only an almost unique example of highly readable historiography; it is a masterpiece of methodology and precise argumentation. Richard W. Bulliet remarks that his personal affections as a historian have not been for heroes but for ordinary men and women. Therefore he is constantly in search for those determinants which influence immediately and permanently the decisions of these people. His methods to trace these determinants are absolutely brilliant and may serve as models not only for the Middle East but for any part of our world. Bert Fragner, Institute of Iranian Studies/Austrian Academy of Sciences

Bulliet offers an innovative, provocative analysis that demonstrates the considerable significance of the era for Iranian, Islamic and world history. Choice

Bulliet writes with candor about the difficulties of attempting this kind of history and offers a tantalizing invitation to others. Technology and Culture

I would describe Bulliet's approach as innovative... Society for Contemporary Thought and the Islamicate World

Preface
1. How to Identify a Cotton Boom
2. Islam and Cotton
3. The Big Chill
4. Of Turks and Camels
5. A Moment in World History
Index

Read an excerpt from the chapter, >A Moment in World History.

Richard W. Bulliet is professor of history at Columbia University. He was born in Rockford, Illinois, and received his B.A., M.A., and Ph.D. from Harvard University. Bulliet joined Columbia in 1976 and directed its Middle East Institute for twelve years. He also served for four years as the executive secretary of the Middle East Studies Association. Bulliet is the author of Hunters, Herders, and Hamburgers: The Past and Future of Human-Animal Relationships; The Case for Islamo-Christian Civilization; Islam: The View from the Edge; and The Camel and The Wheel, and he is the editor of The Columbia History of the Twentieth Century.