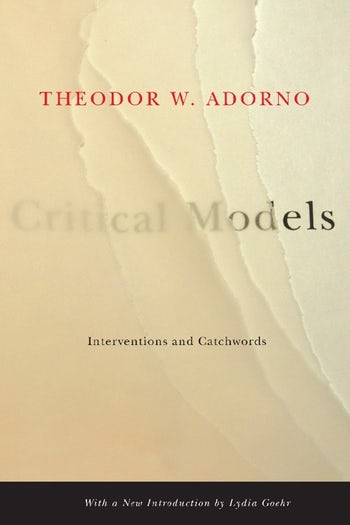 Critical Models combines into a single volume two of Adorno's most important postwar works — Interventions: Nine Critical Models (1963) and Catchwords: Critical Models II (1969). Written after his return to Germany in 1949, the articles, essays, and radio talks included in this volume speak to the pressing political, cultural, and philosophical concerns of the postwar era. The pieces in Critical Models reflect the intellectually provocative as well as the practical Adorno as he addresses such issues as the dangers of ideological conformity, the fragility of democracy, educational reform, the influence of television and radio, and the aftermath of fascism.

This new edition includes an introduction by Lydia Goehr, a renowned scholar in philosophy, aesthetic theory, and musicology. Goehr illuminates Adorno's ideas as well as the intellectual, historical, and critical contexts that shaped his postwar thinking.

[A] collection of essays that offers a view of Adorno in his role as... public intellectual.... Adorno's essays are truly urgent. The Nation

Critical Models... introduce[s] a more accessible Adorno to the public.... In an age of cynicism and practicality, he is more essential than ever. Los Angeles Times Book Review

Preface
Reviewing Adorno: Public Opinion and Critique by Lydia Goehr
Interventions: Nine Critical Models
Introduction
Why Still Philosophy
Philosophy and Teachers
Note on Human Science and Culture
Those Twenties
Prologue to Television
Television as Ideology
Sexual Taboos and Law Today
The Meaning of Working Through the Past
Opinion Delusion Society
Catchwords: Critical Models 2
Introduction
Notes on Philosophical Thinking
Reason and Revelation
Progress
Gloss on Personality
Free Time
Taboos on the Teaching Vocation
Education After Auschwitz
On the Question: "What is German?"
Scientific Experiences of a European Scholar in America
Dialectical Epilegomena: On Subject and Object
Marginalia to Theory and Praxis
Critical Models 3
Critique
Resignation
Appendixes
Appendix 1: Discussion of Professor Adorno's Lecture "The Meanings of Working through the Past"
Appendix 2: Introduction to the Lecture "The Meaning of Working Through the Past"
Publication Information
Notes
Index

Theodor W. Adorno (1903-1969) was one of the most important thinkers of the twentieth century. He is the author of such seminal works as Minima Moralia, The Philosophy of New Music, and, with Max Horkheimer, The Dialectic of Enlightenment.

Lydia Goehr is professor of philosophy and aesthetic theory at Columbia University. She is the author of The Imaginary Museum of Musical Works: An Essay in the Philosophy of Music and The Quest for Voice: Music, Politics, and the Limits of Philosophy.