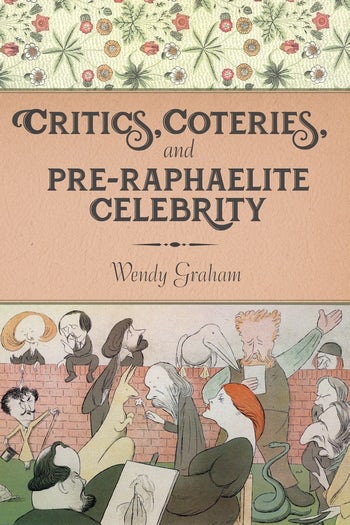 Founded by a band of young iconoclasts, the Pre-Raphaelite Brotherhood stunned Victorian England with its revaluation of culture and lifestyle. With Pre-Raphaelitism ascendant in the 1850s and canonical by the 1880s, the movement’s refractory reception history is an object lesson in how avant-gardes burst upon the scene, dispense with their antagonistic posture, and become a mainstay of tradition. Wendy Graham traces the critical discourses that greeted the Pre-Raphaelites’ debut, shaped their contemporary reception, and continued to inform responses to them well after their heyday. She explains the mechanics of fame and the politics of scandal contributing to the rise of aestheticism, providing a new interpretation of the place of aesthetic counterculture in Victorian England.

Critics, Coteries, and Pre-Raphaelite Celebrity sheds new light on Victorian discourses on sexuality and masculinity through a thick description of literary bravado, the emotions of male bonding within cliques, and homoerotic frissons among the creators and reviewers of Pre-Raphaelitism. Graham threads together the qualities that made William Holman Hunt, John Everett Millais, and Gabriel Rossetti exemplary figures of aesthetic celebrity in the 1850s; Algernon Swinburne and Simeon Solomon in the 1860s; and Edward Burne-Jones and Walter Pater in the 1870s. The book documents the symbiotic relationship between periodical writers and the artists and poets they helped make famous, demonstrating that the origin myth of Bohemian artistic transcendence was connected with the rise of a professional class of journalists. Graham shows that the Pre-Raphaelites innovated many of the phenomena now associated with Oscar Wilde, arguing that they were foundational for him in forging an artistic and personal identity with a full-blown publicity apparatus. Wilde had models. This book is about them.

This is a useful survey of high Victorian critical values, and it helps prepare the way for a deeper understanding of Henry James and Oscar Wilde. Choice

Graham’s is a book for which to feel grateful . . . Her determination to write both the homosociality and the (often denied) homoeroticism of the PRB men back into their story, and thus into cultural history, is an admirable animating purpose. That she does this, too, by means of such energetic, idiosyncratic, passionately engagé prose makes her study a most welcome one. MARGARET D. STETZ, University of Delaware, English Literature in Transition 1880-1920

This book should be welcomed by scholars working in Queer and Gender studies, whom it most directly addresses. Victorianists interested in the figure of the celebrity and the role played by periodicals will also value its detailed reception history. Scholars of Pre-Raphaelite art (and to a lesser extent, literature) will find some interesting and provocative claims to ponder. Elizabeth Helsinger, Cercles

Critics, Coteries, and Pre-Raphaelite Celebrity is chock full of insight. Graham wants us to think of Pre-Raphaelitism as not just a, but the crucial movement in the making of modern ideas of celebrity. Her concern is at once with the Pre-Raphaelites, and with the assortments of critical discourse that greeted their onset, shaped their contemporary reception, and continued to guide critical responses to them well after their supersession. She argues that there exists both within the PRB and its reception a persistent homosocial and often homoerotic dynamic, which shapes the ways we think about art movements and their possibilities. This is a distinguished and fascinating work. Jonathan Freedman, University of Michigan

Wendy Graham is professor of English at Vassar College and the author of Henry James’s Thwarted Love (1999).