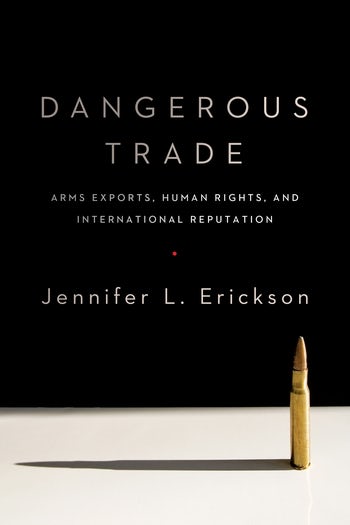 The United Nations's groundbreaking Arms Trade Treaty (ATT), which went into effect in 2014, sets legally binding standards to regulate global arms exports and reflects the growing concerns toward the significant role that small and major conventional arms play in perpetuating human rights violations, conflict, and societal instability worldwide. Many countries that once staunchly opposed shared export controls and their perceived threat to political and economic autonomy are now beginning to embrace numerous agreements, such as the ATT and the EU Code of Conduct.

Jennifer L. Erickson explores the reasons top arms-exporting democracies have put aside past sovereignty, security, and economic worries in favor of humanitarian arms transfer controls, and she follows the early effects of this about-face on export practice. She begins with a brief history of failed arms export control initiatives and then tracks arms transfer trends over time. Pinpointing the normative shifts in the 1990s that put humanitarian arms control on the table, she reveals that these states committed to these policies out of concern for their international reputations. She also highlights how arms trade scandals threaten domestic reputations and thus help improve compliance. Using statistical data and interviews conducted in France, Germany, Belgium, the United Kingdom, and the United States, Erickson challenges existing IR theories of state behavior while providing insight into the role of reputation as a social mechanism and the importance of government transparency and accountability in generating compliance with new norms and rules.

In novel and creative ways, Dangerous Trade integrates a variety of theoretical approaches to security and arms studies; global governance; international and domestic affairs; and qualitative and quantitative data. With fresh thinking and originality, this book does not re-chew what others have already said or go down paths already trodden. Indeed, it shows an innovative mind at work. Ulrich Krotz, European University Institute

Erickson has written an important work that speaks to concerns and debates among international relations theorists, students of international institutions, and scholars of arms transfers. For all the talk in recent years of 'mixed methods' and 'eclectic approaches,' this is a book that actually delivers. It uses quantitative and qualitative techniques to develop and test a refreshingly broad theory of social reputation in international and domestic politics. Instead of engaging in tribal wars, Erickson shows that rational choice scholars and constructivists are both right, and that both have been remiss in failing to theorize domestic politics. This is a wonderful book and must-read, not only for students of arms transfers but also for a new generation of international relations scholars seeking to build rigorous theory that captures the complexity of the social world states inhabit. Jeffrey T. Checkel, Simon Fraser University, and global fellow, Peace Research Institute Oslo

Why do states sometimes do good, even against their clear material and strategic interests? In this smart book, Jennifer L. Erickson provides a compelling and surprising answer that defies easy characterization. Governments are calculating, strategic, and even cynical about when and under what circumstances they may tie their hands for the noble purpose of limiting the flow of weapons to bad actors. But all the strategic concerns ultimately are shaped by social norms and the quintessentially human desire to be seen in a favorable light. Erickson develops and tests this important argument with wonderfully informative and compact case studies and empirical analysis. There are no wasted words in this book, just deep learning, conveyed with the brisk confidence borne of years of hard work and deep thinking. Dangerous Trade is a signal advance in scholarship that helps us understand major changes in international relations since the Cold War's end. William C. Wohlforth, Dartmouth College

[Dangerous Trade] is at once a page-turner and a page-lingerer due to its riveting prose and profound lessons to the scholarship in international relations. H-Diplo

A methodologically and analytically eclectic take on efforts to impose human rights concerns on the arms trade. It is an easy read and a good contribution to the academic literature on transnational advocacy. Humanity

Jennifer L. Erickson is associate professor of political science and international studies at Boston College. She has also been a nuclear security fellow at the Center for International Security and Cooperation at Stanford University and a research affiliate at the Massachusetts Institute of Technology Security Studies Program.