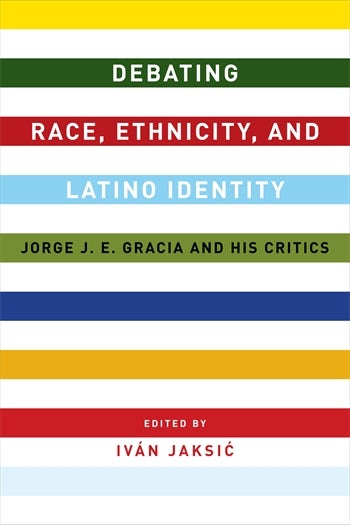 These intellectuals start with the philosophy of Hispanics/Latinos in the United States and then move to the philosophy of African Americans and Anglo Americans in the United States and the philosophy of Latin Americans in Latin America. Gracia and his interlocutors debate the nature of race and ethnicity and their relation to nationality, linguistic rights, matters of identity, and Affirmative Action, binding the concepts of race and ethnicity together in ways that open new paths of inquiry. Gracia's Familial-Historical View of ethnic and Hispanic/Latino identity operates at the center of each of these discussions, providing vivid access to the philosopher's provocative arguments while adding unique depth to issues that each of us struggles to understand.

This book contains the best and most thorough defense of Gracia's Familial-Historical View of Hispanic identity and original arguments concerning the complex relations among race, ethnicity, and nationality; linguistic rights and Affirmative Action; and the identity, status, and future of Hispanic/Latin American/Latino philosophy. José Medina, Vanderbilt University

Jorge J. E. Gracia is one of the preeminent theorists of Hispanic/Latino identity, as the distinguished philosophers who discuss his work in this volume confirm. To have these responses gathered in one place together with Gracia's own replies gives the reader a wonderful opportunity to reflect on both the character of ethnic labels and the career of a remarkable thinker. Robert Bernasconi, Penn State University

The leading scholars in this volume engage key ideas from Gracia's magisterial and comprehensive contributions to the field of race and ethnicity. They examine positions developed by Gracia on Hispanic/Latino identities and histories in terms of philosophy, race, ethnicity, and nationality, and they critique him on philosophy, metaphysics, society, identity, politics, and the descriptive-normative divide. Gracia's incisive responses succeed in refocusing and reanimating debate. Altogether, this work will be a classic for study and research on Hispanic/Latino identity as a vital part of the philosophy of race and ethnicity. Naomi Zack, University of Oregon

Philosophical discussions of race have come a long way in the last twenty years, but they have been dominated by the black American experience. In a United States where Latinos are the largest ethnoracial minority, who will be central to the projected demographic shift to a nonwhite majority by the year 2040 or so, the marginalization of their experience and of Latino/Latin American Philosophy more generally is deplorable. Especially for readers unfamiliar with the literature, this collection of discussions and critiques of Jorge Gracia's work, together with his replies, will provide an invaluable introduction both to crucial philosophical issues of Latino identity and ethnoracial status, and to the writings of one of the major figures of the field, who has been thinking deeply and rigorously about these matters for decades now. Charles W. Mills, Northwestern University

Jorge J. E. Gracia is the Samuel P. Capen Chair and SUNY Distinguished Profesor in the Department of Philosophy and Department of Comparative Literature at the State University of New York at Buffalo. He is the author of nineteen books and has edited another two dozen in such fields as metaphysics, interpretation, race, ethnicity, medieval philosophy, Latin American philosophy, and Hispanic/Latino issues.

Iván Jaksic is director of the Santiago Program for the Bing Overseas Studies Program at Stanford University. He is the author of The Hispanic World and American Intellectual Life, 1820–1880, as well as several books and essays on the intellectual history of the Americas. He has held academic appointments at the University of California, Berkeley; the University of Wisconsin–Milwaukee; and the University of Notre Dame.