Democracy, Islam, and Secularism in Turkey 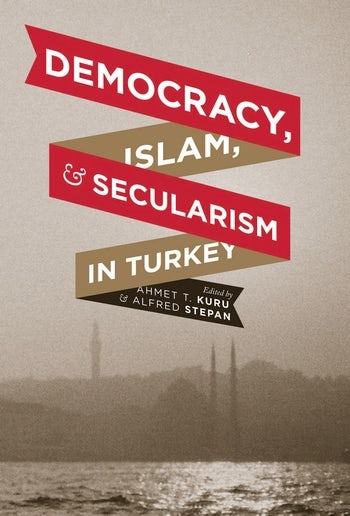 Democracy, Islam, and Secularism in Turkey

While Turkey has grown as a world power, promoting the image of a progressive and stable nation, several choices in policy have strained its relationship with the East and the West. Providing historical, social, and religious context for this behavior, the essays in Democracy, Islam, and Secularism in Turkey examine issues relevant to Turkish debates and global concerns, from the state's position on religion to its involvement with the European Union.

Written by experts in a range of disciplines, the chapters explore the toleration of diversity during the Ottoman Empire's classical period; the erosion of ethno-religious heterogeneity in modern, pre-democratic times; Kemalism and its role in modernization and nation building; the changing political strategies of the military; and the effect of possible EU membership on domestic reforms. The essays also offer a cross-Continental comparison of "multiple secularisms," as well as political parties, considering especially Turkey's Justice and Development Party in relation to Europe's Christian Democratic parties. Contributors tackle critical research questions, such as the legacy of the Ottoman Empire's ethno-religious plurality and the way in which Turkey's assertive secularism can be softened to allow greater space for religious actors. They address the military's "guardian" role in Turkey's secularism, the implications of recent constitutional amendments for democratization, and the consequences and benefits of Islamic activism's presence within a democratic system. No other collection confronts Turkey's contemporary evolution so vividly and thoroughly or offers such expert analysis of its crucial social and political systems.

As interest in Turkey continues to grow, people will be lucky to have this book to turn to in order to understand the politics of this important country. Its essays provide excellent analyses of the place of Islam in Turkish politics from a number of different perspectives. The result is a truly rich collection that sheds light on the unique experience of Turkey and considers the comparative implications of its history in the region and beyond. Resat Kasaba, University of Washington, author of A Moveable Empire: Ottoman Nomads, Migrants, and Refugees

This is a rich collection of essays that helps to clarify and deepen understanding of Turkey's complex past, transitional present, and promising future.... Highly recommended. Choice

This volume is a significant contribution to Turkish studies. Middle East Policy

All its chapters will be read with profit by nonexperts and serve as useful refreshers for experts. Admirable, too, is its jargon-free language. Michael M. Gunter, Journal of Church and State

This volume significantly contributes to a growing literature on Islam, democracy, and secularism in Turkey. Providing a historical background to the Turkish case from the Ottoman millet system to Kemalism and the later development of civil society, the book delivers a strong basis for the study of Turkish democratization. Mustafa Gökçek, Sociology of Islam

Introduction, by Ahmet T. Kuru and Alfred Stepan
1. Rethinking Ottoman Management of Diversity: What Can We Learn for Modern Turkey, by Karen Barkey
2. The Historical Roots of Kemalism, by M. Şükrü Hanioğlu
3. Turkey—Plural Society and Monolithic State, by Ergun Özbudun
4. Laïcité as an "Ideal Type" and a Continuum: Comparing Turkey, France, and Senegal, by Ahmet T. Kuru and Alfred Stepan
5. A New Politics of Engagement: The Turkish Military, Society, and the AKP, by Ümit Cizre
6. The Turkish Constitutional Court and Political Crisis, by Ergun Özbudun
7. Turkey's Accession to the European Union and the Role of the Justice and Development Party, by Joost Lagendijk
8. The "Turkish Model" in the Matrix of Political Catholicism, by Stathis N. Kalyvas
Selected Bibliography
Contributors
Index

Ahmet T. Kuru, a former postdoctoral scholar at Columbia University, is associate professor of political science at San Diego State University and chair of the Religion and Politics Section of the American Political Science Association. He is the author of Secularism and State Policies Toward Religion: The United States, France, and Turkey.

Alfred Stepan is the Wallace Sayre Professor of Government at Columbia University and a former Gladstone Professor of Government at All Souls College, Oxford University. His most recent book, with Juan J. Linz and Yogendra Yadav, is Crafting State-Nations: India and Other Multinational Democracies, and another book with Linz, Problems of Democratic Transition and Consolidation: Southern Europe, South America, and Post-Communist Europe, has been translated into nearly a dozen languages.