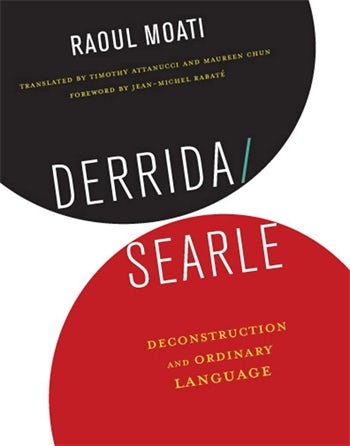 Raoul Moati intervenes in the critical debate that divided two prominent philosophers in the mid-twentieth century. In the 1950s, the British philosopher J. L. Austin advanced a theory of speech acts, or the "performative," that Jacques Derrida and John R. Searle interpreted in fundamentally different ways. Their disagreement centered on the issue of intentionality, which Derrida understood phenomenologically and Searle read pragmatically. The controversy had profound implications for the development of contemporary philosophy, which, Moati argues, can profit greatly by returning to this classic debate.

In this book, Moati systematically replays the historical encounter between Austin, Derrida, and Searle and the disruption that caused the lasting break between Anglo-American language philosophy and continental traditions of phenomenology and its deconstruction. The key issue, Moati argues, is not whether "intentionality," a concept derived from Husserl's phenomenology, can or cannot be linked to Austin's speech-acts as defined in his groundbreaking How to Do Things with Words, but rather the emphasis Searle placed on the performativity and determined pragmatic values of Austin's speech-acts, whereas Derrida insisted on the trace of writing behind every act of speech and the iterability of signs in different contexts.

In its very violence, the debate between Jacques Derrida and John Searle was the proof of the gap that continues to separate the continental speculative tradition from its Anglo-Saxon analytic counterpart. Raoul Moati's book is much more than a review of the debate—he is part of the debate, bringing it to its philosophical conclusion. Sometimes, while reading his book, one has the feeling that Derrida and Searle engaged in their debate so that Moati could write his book on them, in the same way that, for Hegel, the Peloponnesian War was fought so that Thucydides could write his classic book on it. Slavoj iek

Derrida and Searle's confrontation divided once and for all philosophical debate and division with consequences that probably surpassed both masters' predictions. The fact that this debate never took place (considering that Searle and Derrida never met personally and the former also refused to reprint one of his responses in an edited collection) makes Moati's text particularly useful in reconstructing the history of this famous dispute. Santiago Zabala, ICREA Research Professor of Philosophy at the University of Barcelona

A very brilliant reconstruction of the philosophical clash between two prominent giants of continental and American philosophies. Thibaut Gress, ActuPhilosophia

There are almost no other studies of this controversy either in France or in the United States; at least, there is no other book that I know about on this topic. The dialogue between Searle and Derrida concerning Austin's theory on the 'performative' or 'speech acts' has been, as it were, resurrected by Moati—and it is fascinating. By focusing so strictly on a limited series of polemical texts, Moati does more than provide a subtle explanation of the historical divergence between Austin, Searle, and Derrida, he allows us to understand the very roots of a lasting misunderstanding between Anglo-American language philosophy and continental traditions of phenomenology. Jean-Michel Rabaté, University of Pennsylvania, member of the American Academy of Arts and Sciences

Moati's work is a real breakthrough. He helps us make sense of the very distinction between so-called analytic and continental philosophies. The exceptional clarity of his style, the accuracy of his analyses shed a completely new light on both authors and the nature of their quarrel. He provides deep insight into Derrida's view and Searle's, addressing their common presuppositions. The outcome of such an unbiased approach is a completely new understanding of the contemporary philosophical landscape. It will prove helpful for philosophers of language and mind, as well as for metaphysicians, and for everyone who wants to understand the big philosophical divide that has characterized the past fifty years. Jocelyn Benoist, University of Paris-I, Panthéon-Sorbonne

A thoughtful and judicious analysis... CHOICE

Foreword: Per Formam Domi, by Jean-Michel Rabaté
Acknowledgments
Introduction: The Circumstances of an "Improbable" Debate
1. The Iterative as the Reverse Side of the Performative
2. Do Intentions Dissolve in Iteration? From Differance to the Dispute (Différend)
Conclusion
Notes
Index

Read the introduction "The Circumstances of an 'Improbable Debate'":

Timothy Attanucci is a lecturer in German at Princeton University.

Maureen Chun is a postdoctoral fellow and honorary assistant professor of English at the University of Hong Kong.

Jean-Michel Rabaté is a professor of English and comparative literature at the University of Pennsylvania.