Political Knowledge After Total War, Totalitarianism, and the Holocaust 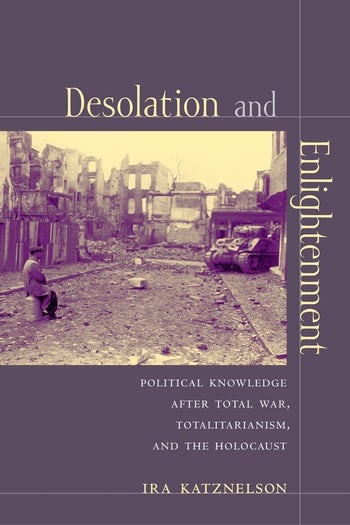 Political Knowledge After Total War, Totalitarianism, and the Holocaust

During and especially after the Second World War, a group of leading scholars who had been perilously close to the war's devastation joined others fortunate enough to have been protected by distance in an effort to redefine and reinvigorate Western liberal ideals for a radically new age. Treating evil as an analytical category, they sought to discover the sources of twentieth-century horror and the potentialities of the modern state in the wake of western desolation. In the process, they devised strikingly new ways to understand politics, sociology and history that reverberate still. In this major intellectual history, Ira Katznelson examines the works of Hannah Arendt, Robert Dahl, Richard Hofstadter, Harold Lasswell, Charles Lindblom, Karl Polanyi, and David Truman, detailing their engagement with the larger project of reclaiming the West's moral bearing.

In light of their epoch's calamities these intellectuals insisted that the tradition of Enlightenment thought required a new realism, a good deal of renovation, and much recommitment. This array of historians, political philosophers, and social scientists understood that a simple reassertion of liberal modernism had been made radically insufficient by the enormities and moral catastrophes of war, totalitarianism, and holocaust. Confronting their period's dashed hopes for reason and knowledge, they asked not just whether the Enlightenment should define modernity, but which Enlightenment we should wish to have. Decades later, in the midst of a new type of war and reanimated discussions of the concept of evil, we share no small stake in assessing their successes and limitations.

In this masterful excursion into the history of ideas, Katznelson explores how a 'reconstructionist' generation of political scholars has since attempted to make sense of these dark times and rethink the bases of political theory and liberal community... Although the book was written largely before the attacks of September 11, 2001, it speaks powerfully to today's struggles to reconcile liberal values with a new threat of violence. G. John Ikenberry, Foreign Affairs

Katznelson's book is an excellent study of one episode in the history of social sciences, an episode that is by no means interesting only to historians. Historical institutionalism is still a very productive approach andDesolation and Enlightenment helps to identify the strengths and limitations of this approach that may be hidden to its contemporary advocates and critics... Katznelson's work shows how real the dilemmas of the political studies enlightenment group are to all of us. Kamila Stullerova, European Journal of Social Theory

Desolation and Enlightenment is a passionate call to arms.... [Katznelson's] book provides inspiration and considerable guidance for anyone who believes in the social responsibilities of intellectuals. Ethics & International Affairs

Katznelson's book is well written, a clear yet crystalline, multifaceted examination of the plight of Enlightenment thought. Year's Work in Critical and Cultural Theory

Preface and Acknowledgments
1. Beyond Common Measure
2. The Origins of Dark Times
3. A Seminar on the State
4. A New Objectivity
Index

Ira Katznelson is Ruggles Professor of Political Science and History at Columbia University. He is the author of many books, including Marxism and the City and the award-winning Liberalism's Crooked Circle: Letters to Adam Michnik. He has served as president of the Social Science History Association and of the Politics and History Section of the American Political Science Association.