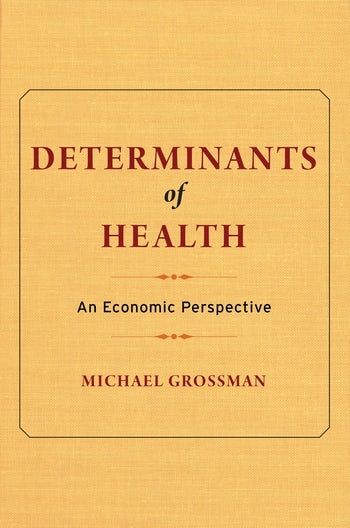 This collection of Michael Grossman’s most important papers adds essential background and depth to his work on economic determinants of public health. Each of the book’s four sections includes an introduction that contextualizes the issues and addresses the larger stakes of his work. An afterword discusses the significance of Grossman’s approach for subsequent research on health economics, as well as the work others have done to advance and extend his innovative perspective.

Determinants of Health explains how the economic choices people make influence health and health behaviors. It begins with a section on the theoretical underpinnings and empirical results of Grossman’s groundbreaking health economics model, first introduced in the 1970s, followed by essays on the relationship between health and schooling; determinants of infant health, with a special emphasis on public policies and programs; and the economics of unhealthy behaviors. Grossman treats health as a form of human capital. He shows that public policies and programs that determine the price and availability of key inputs have critical effects on outcomes ranging from birth weight and infant mortality to cigarette smoking, alcohol abuse, illegal drug use, and obesity. Grossman’s approach has led to a major stream of literature in the field, sparking contributions by the world’s leading health economists, including Joseph Newhouse, Jonathan Gruber, Amy Finkelstein, Michael Greenstone, and David Cutler. His clarity on the role that economics play in people’s good and bad health choices is immensely valuable to the debate over how we legislate and spend on health.

A volume of Grossman's selected works is long overdue. One of the founders of the field of health economics, he has been an incredibly prolific researcher, and there is enormous value to having his seminal papers available in book form. Joseph Newhouse, Harvard University

They say that success has many fathers—and one clear share of paternity for the incredibly successful field of health economics belongs to Grossman. His work on health capital defined the framework for economists' modeling health outcomes, and his broad empirical agenda has led the way in applying the model. And his research agenda on addictive behaviors paved the way for the entry of this area into mainstream health economics. This book is a terrific chance for those inside and outside the field to reflect on Grossman's many accomplishments. Jonathan Gruber, Massachusetts Institute of Technology

Michael Grossman is one of the founders of the field of health economics, who has contributed enormously to our understanding of the demand for health, the relationship between education and health, determinants of infant health, and the economics of risky health behaviors. This volume of his best, most often-cited articles (which are required reading in graduate courses in health economics) is long overdue. I use and cite these papers routinely, and this volume will have a prominent place on my bookshelf, next to the works of Gary Becker. John Cawley, Cornell University, coeditor of the Journal of Health Economics

This volume collects papers that rest on and flow from Michael Grossman’s seminal 1972 model of health capital. The coherent and impressive body of work informs and serves as a “hypothesis generating machine.” Discerning readers will be inspired to push the frontier of knowledge about the rational production of health. Dean Lillard, The Ohio State University

Michael Grossman was the original intellectual leader in the economics of population health and health behaviors, and his leadership internationally has persisted over five decades. This book assembles his work from disparate sources in one place. His commentaries on his studies provide helpful perspective, especially for relative newcomers to the field. However, even old-timers are likely to discover papers relevant to their own work that they wish they had read previously. Frank Sloan, Duke University

The volume is a solid, even exceptional, contribution to the shelf of any library that considers human health and behavior a worthwhile object of inquiry. Highly recommended. T. E. Getzen, iHEA and Temple University, Choice

Michael Grossman is Distinguished Professor of Economics at the City University of New York Graduate Center, Health Economics Program Director at the National Bureau of Economic Research, and a research fellow at IZA. He is the inaugural recipient of the American Society of Health Economists' award for lifetime contributions to the field of health economics. He is also the author of The Demand for Health: A Theoretical and Empirical Investigation (Columbia, 2017).