Down the Up Staircase

Three Generations of a Harlem Family 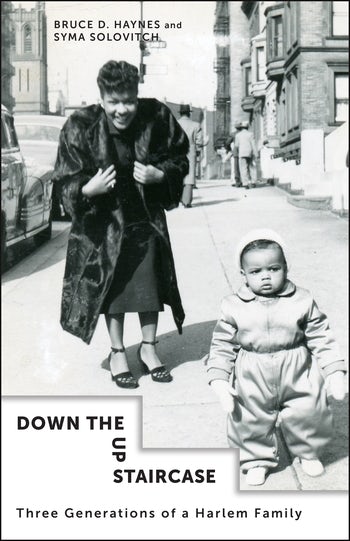 Down the Up Staircase

Three Generations of a Harlem Family

Down the Up Staircase tells the story of one Harlem family across three generations, connecting its journey to the historical and social forces that transformed Harlem over the past century. Bruce D. Haynes and Syma Solovitch capture the tides of change that pushed blacks forward through the twentieth century—the Great Migration, the Harlem Renaissance, the early civil rights victories, the Black Power and Black Arts movements—as well as the many forces that ravaged black communities, including Haynes's own. As an authority on race and urban communities, Haynes brings unique sociological insights to the American mobility saga and the tenuous nature of status and success among the black middle class.

In many ways, Haynes's family defied the odds. All four great-grandparents on his father's side owned land in the South as early as 1880. His grandfather, George Edmund Haynes, was the founder of the National Urban League and a protégé of eminent black sociologist W. E. B. Du Bois; his grandmother, Elizabeth Ross Haynes, was a noted children's author of the Harlem Renaissance and a prominent social scientist. Yet these early advances and gains provided little anchor to the succeeding generations. This story is told against the backdrop of a crumbling three-story brownstone in Sugar Hill that once hosted Harlem Renaissance elites and later became an embodiment of the family's rise and demise. Down the Up Staircase is a stirring portrait of this family, each generation walking a tightrope, one misstep from free fall.

Bruce D. Haynes's story is a classic American tale—which combines the big themes of history with the gritty reality of a single family's extraordinary story. Jeffrey Toobin, staff writer at The New Yorker and senior legal analyst at CNN

Haynes channels W. E. B. Du Bois to provide a rich sociological portrait of his "talented tenth" family. The lively writing conveys both universal family dramas of social mobility (up and down) as well as the particular context of Harlem across the twentieth century. A great read! Dalton Conley, author of Honky, Princeton University

An utterly captivating work that shows off Haynes's brilliant sociological imagination on every page. He and Solovitch are masterful at linking the small personal details of everyday family and community life to social structure and history. Like Dalton Conley's Honky, this book will be seen as a significant contribution to the emerging literary form of sociological memoir. Mitchell Duneier, author of Ghetto: The Invention of a Place, the History of an Idea, Princeton University

Down the Up Staircase is a beautifully written, captivating, and absorbing book that connects seemingly private concerns with public policies and structures in clear and convincing fashion. It delineates vividly how poverty and downward mobility do not make people noble, resilient, and resourceful, but instead shatter social ties and self-esteem. This fast-paced book will likely be consumed by readers in one sitting, but its powerful and poignant stories will linger in the mind long afterwards. George Lipsitz, author of How Racism Takes Place

Down the Up Staircase is a riveting narrative about three generations of a black family and their struggle to maintain inherited privilege. Written with elegance and penetrating insight, the book shines light on the precarity that all blacks confront, regardless of their social class and personal ambitions. Stephen Steinberg, author of Race Relations: A Critique, professor of urban sociology at Queens College and the Graduate Center, City University of New York

This masterful account begins as a portrait of a house that was a living, breathing extension of the family that lived in it both in hopeful times and in darker ones. But it soon reaches out into the larger social landscape of Harlem and then into the changing history and culture of an entire land. In doing so, it shifts seamlessly from a sensitive biography to a thoughtful ethnographic sketch of an important place in an important time, and then into a wise and compelling essay on the social history of our time. What we encounter on the printed page, of course, is written narrative, but it is conveyed to us in what might best be described as a rich and perceptive voice. In every way, a remarkable work. Kai Erikson, Yale University

This thoughtful and sobering memoir weaves the beauty and tragedy of Haynes's family story into the complex history of Harlem.... Like Harlem's story, the memoir is bittersweet, painting a full and complicated picture of black upper-class life over generations. Publishers Weekly

Down the Up Staircase combines elements of memoir and sociology, culminating in an incredibly rich story. Bookish

In this thoughtfully conceived and crafted memoir, the authors offer evocative, relentlessly honest portrayals without judgment. In doing so, they encourage the reader to ponder the variables in her own life, the tides and forces that help or hinder her pursuit of the sweet life. Elizabeth Dowling Taylor, The New York Times Book Review

As Isabel Wilkerson did expertly in 'The Warmth of Other Suns' — the Pulitzer Prize-winning epic tale of the Great Migration — Haynes and Solovitch follow their relatives through decades, revealing the impact of public policy and social change on the family from generation to generation. Krissah Thompson, Washington Post

Haynes and Solovitch weave memoir and sociology to document the shifting fortunes of the black middle-class family, and of Harlem itself, and illuminate the tenuous nature of status and success among the black middle class. The Davis Enterprise

Interweaving a variety of sociological concepts and historical examinations with intimate portraits of this singular family, Down the Up Staircase takes readers on an entertaining and provocative tour of twentieth-century urban America. Richard E. Ocejo, New Books in Sociology

Down The Up Staircase is more than a story of a family, far more than the chronology of a home. And yet the entire tale — the story of the black experience in the 20th century—feels like it’s being very intimately told to you from the parlor. The Bowery Boys

Like Harlem’s story, the memoir is bittersweet, painting a full and complicated picture of black upper-class life over generations. Harlem World Magazine

In Down the Up Staircase: Three generations of a Harlem Family, Bruce D. Haynes (with his co-author, Syma Solovitch) gives us a poignant memoir of his own Uptown youth in the 60s, 70s and 80s, and also reaches further back to when his grandparents bought a townhouse in the Sugar Hill district in 1931. Benjamin George Friedman, Times Literary Supplement

Every sociologist—indeed everyone—interested in race, mobility, and the African American experience should read this book. It will motivate rethinking of the stakes and consequences for African Americans striving to get or stay ahead. For sociologists and other scholars of race and the urban experience, as well as lay readers who desire to understand more fully much of what black family life in urban America was all about during the past 100 years, it should be a required text. Alford A. Young, Jr., Sociological Forum

Haynes and Syma Solovitch show a surprisingly complex account of black middle class life in a biographically and analytically novel way. . . . Down the Up Staircase adds an important lens to the numerous complexities of generational social mobility for African Americans in the United States. Edwin Grimsley, City & Community

Down the Up Staircase: Three Generations of a Harlem Family is at once a history of Black Harlem, Black social science in and beyond the academy, and the Black elite class. . . . In Haynes and Solovitch’s narrative hands, the book’s key characters – the three generations of the Haynes family, the Convent Avenue brownstone, and Harlem – do sweeping and personal historical work about race, class, and cities in twentieth century America. Zandria F. Robinson, Ethnic and Racial Studies

Down the Up Staircase: Three Generations of a Harlem Family, guides readers through the double glass doors of the Haynes family home as the tell the tale of Harlem's historical and social transformation using the family's crumbling three-story brownstone as the backdrop. Haynes and Solovitch pull back the proverbial curtains to document the tenuous nature of achievement, success, and status among the black middle class. Contemporary Sociology

Bruce D. Haynes is professor in the Department of Sociology at the University of California, Davis. He is the author of Red Lines, Black Spaces: The Politics of Race and Space in a Black Middle-Class Suburb (2001) and the coeditor of The Ghetto: Contemporary Global Issues and Controversies (2011).

Syma Solovitch is a freelance writer, developmental editor, and educator. This is her first book.