Oil, Power, Palestine, and the Foundations of U.S. Policy in the Middle East, With a new preface 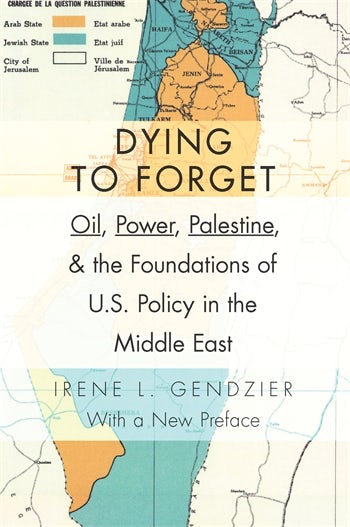 Oil, Power, Palestine, and the Foundations of U.S. Policy in the Middle East, With a new preface

Irene L. Gendzier presents incontrovertible evidence that oil politics played a significant role in the founding of Israel, the policy then adopted by the United States toward Palestinians, and subsequent U.S. involvement in the region. Consulting declassified U.S. government sources, as well as papers in the H.S. Truman Library, she uncovers little-known features of U.S. involvement in the region, including significant exchanges in the winter and spring of 1948 between the director of the Oil and Gas Division of the Interior Department and the representative of the Jewish Agency in the United States, months before Israel's independence and recognition by President Truman.

Gendzier also shows that U.S. consuls and representatives abroad informed State Department officials, including the Secretary of State and the President, of the deleterious consequences of partition in Palestine. Yet the attempt to reconsider partition and replace it with a UN trusteeship for Palestine failed, jettisoned by Israel's declaration of independence. The results altered the regional balance of power and Washington's calculations of policy toward the new state. Prior to that, Gendzier reveals the U.S. endorsed the repatriation of Palestinian refugees in accord with UNGA Res 194 of Dec. 11, 1948, in addition to the resolution of territorial claims, the definition of boundaries, and the internationalization of Jerusalem. But U.S. interests in the Middle East, notably the protection of American oil interests, led U.S. officials to rethink Israel's military potential as a strategic ally. Washington then deferred to Israel with respect to the repatriation of Palestinian refugees, the question of boundaries, and the fate of Jerusalem—issues that U.S. officials have come to realize are central to the 1948 conflict and its aftermath.

By tying together the strands of oil and strategic interests in Saudi Arabia with the familiar narrative about the American relationship with Zionism, this book is a major contribution to our understanding of crucial events for the future of the Middle East. Gendzier provides revelations and fresh insights throughout. Rashid Khalidi, Columbia University

Drawing from a rich variety of sources, many previously untapped, Irene L. Gendzier provides a most valuable reinterpretation of the roots of U.S. policy towards Israel and the Palestinians. In particular, she shows convincingly that the crucial choice for planners was not 'oil versus Israel,' as commonly believed, but rather 'oil and Israel,' and demonstrates no less convincingly that the secrets of the past that she uncovers are intimately connected with 'the troubled present.' A very significant contribution. Noam Chomsky, Massachusetts Institute of Technology

Present-day U.S. policy in the Middle East consists of contradictions wrapped in illusions propped up by hypocrisies. Gendzier traces those contradictions, illusions, and hypocrisies to a single point of origin: Washington's ill-fated response to the 'Palestine question' during the pivotal years from 1945 to 1949. Dying to Forget is comprehensive, illuminating, and, above all, compelling—revisionism in the best sense of the term. Andrew J. Bacevich, author of Washington Rules: America's Path to Permanent War

In this fascinating, illuminating, and authoritative reconstruction of the complex evolution of U.S. policy toward the emergence of Israel, Gendzier tells a gripping story that displays extraordinary narrative skills as well as exhibiting her mastery of an astonishing range of scholarly materials. Although primarily a brilliant contribution to diplomatic history, this work is relevant to our understanding of the crucial interplay between Israeli diplomacy and oil geopolitics in the Middle East. Richard A. Falk, Princeton University

A Middle East scholar uncovers the post-World War II history of American policy in Palestine. From the beginning, it's been about oil.... compiling an almost bulletproof brief. Vital reading for those looking to understand, 65 years later, the origins of the continuing conflict in the Middle East. Kirkus Reviews

Gendzier's thorough but dense account, best suited to the serious student of Middle East policy, is essential to any sophisticated understanding of the Israeli-Palestinian conflict. Publishers Weekly

Making excellent use of the previously overlooked papers of Max Ball, who directed the Oil and Gas Division of the Department of the Interior, Gendzier methodically reveals the significant role that oil played in US calculations about the emerging State of Israel. Middle East Journal

Dying to Forget is an important reminder that two of the most important challenges confronting the United States in the Middle East at the dawn of the age of Trump - America's addiction to oil and Israel's denial of Palestinian self-determination-have deep roots in decisions made seven decades ago at the dawn of the Cold War. Diplomatic History

Gendzier's study. . . enlightens us to the development of the 'special relationship' between the United States and Israel. Journal of Palestine Studies

Acknowledgments
Preface to the Paperback Edition: The U.S. Record on Israel and Palestine, 1948
Introduction: Open Secrets
Part I: The Postwar Petroleum Order and the Palestine Question, 1945–1946
1. The Primacy of Oil
2. The Palestine Question: 1945
Part II: The Question of Partition and the Oil Connection, 1947–1948
3. The Critical Year: 1947
4. The Winter of Discontent: 1948
5. The Oil Connection
Part III: Beware "Anomalous Situations," 1948
6. The Transformation of Palestine
7. Truce and Trusteeship
8. Recognition and Response
Part IV: Rethinking U.S. Policy in Palestine/Israel, 1948
9. Reconsidering U.S. Policy in Palestine
10. The Palestine Refugee Problem
11. The State Department on the Record
Part V: The End as the Beginning, 1948–49
12. The PCC, Armistice, Lausanne, and Palestinian Refugees
13. The View from the Pentagon and the National Security Council
14. The Israeli–U.S. Oil Connection and Expanding U.S. Oil Interests
Part VI: In Place of a Conclusion
Reflections on Discovery, Denial, and Deferral
Notes
Index

Read the Introduction to Dying to Forget:

Irene L. Gendzier is professor emerita in the Department of Political Science at Boston University. She is also the author of Notes from the Minefield: United States Intervention in Lebanon and the Middle East, 1945–1958 and Frantz Fanon: A Critical Study, and she is a coeditor, with Richard Falk and Robert Lifton, of Crimes of War: Iraq.