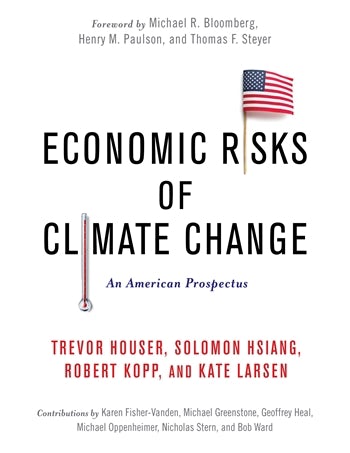 This prospectus is based on a critically acclaimed independent assessment of the economic risks posed by climate change commissioned by the Risky Business Project. With new contributions from Karen Fisher-Vanden, Michael Greenstone, Geoffrey Heal, Michael Oppenheimer, and Nicholas Stern and Bob Ward, as well as a foreword from Risky Business cochairs Michael Bloomberg, Henry Paulson, and Thomas Steyer, the book speaks to scientists, researchers, scholars, activists, and policy makers. It depicts the distribution of escalating climate-change risk across the country and assesses its effects on aspects of the economy as varied as hurricane damages and violent crime. Beautifully illustrated and accessibly written, this book is an essential tool for helping businesses and governments prepare for the future.

Points the way toward a new era in climate-risk analysis.... [T]he authors not only provide a basis for rational judgments by policy makers but also open a new avenue toward progressive improvement in our understanding of risk. From the opening commentary by Michael Oppenheimer, Princeton University

Solid scholarship shows that we can improve the economy through wise use of our knowledge of climate change and energy. Better quantifying the uncertainties and near-certainties will help guide wise policies. Economic Risks of Climate Change: An American Prospectus is an important step forward. Richard Alley, Pennsylvania State University, author of Earth: The Operators' Manual

This report has changed my understanding of what climate change means for the United States, providing incredibly detailed visibility into regional changes in climate and their economic consequences to specific sectors. Given its unique ability to touch home for so many, I suspect the study will ultimately be considered a landmark contribution in our understanding of this complex and vital subject. From the opening commentary by Michael Greenstone, University of Chicago

This report is a careful, very timely and fundamentally important contribution.... Its legacy should be continued research to assess and, where possible, quantify those impacts that cannot now be avoided, and which must be adapted to, as well as to gain a better grasp of just how huge the risks of unmanaged climate change are likely to be, even for a superpower. From the opening commentary by Lord Nicholas Stern and Bob Ward, Grantham Research Institute on Climate Change and the Environment

Solomon Hsiang is the Chancellor's Associate Professor of Public Policy at the University of California, Berkeley, and a Faculty Research Fellow at the National Bureau of Economic Research.

Robert Kopp is an associate professor of earth and planetary sciences at Rutgers University and associate director of the Rutgers Energy Institute.

Kate Larsen is a director at Rhodium Group and manages the firm's work on U.S. and global climate-change issues.