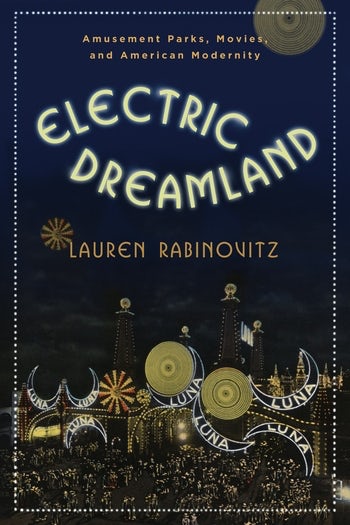 Amusement parks were the playgrounds of the working class in the early twentieth century, combining numerous, mechanically-based spectacles into one unique, modern cultural phenomenon. Lauren Rabinovitz describes the urban modernity engendered by these parks and their media, encouraging ordinary individuals to sense, interpret, and embody a burgeoning national identity. As industrialization, urbanization, and immigration upended society, amusement parks tempered the shocks of racial, ethnic, and cultural conflict while shrinking the distinctions between gender and class. Following the rise of American parks from 1896 to 1918, Rabinovitz seizes on a simultaneous increase in cinema and spectacle audiences and connects both to the success of leisure activities in stabilizing society. Critics of the time often condemned parks and movies for inciting moral decline, yet in fact they fostered women's independence, racial uplift, and assimilation. The rhythmic, mechanical movements of spectacle also conditioned audiences to process multiple stimuli. Featuring illustrations from private collections and accounts from unaccessed archives, Electric Dreamland joins film and historical analyses in a rare portrait of mass entertainment and the modern eye.

Electric Dreamland innovatively analyzes the early twentieth-century's twin technological entertainments: amusement parks and motion pictures. It demonstrates how crucial railroads and electricity were to both and how their inextricable development erased conventional notions of urban and rural difference. Amusement parks and motion pictures, Lauren Rabonovitz argues, served as unique venues of mass culture for people to adapt to modernity by experiencing its pleasures and dangers first hand and to share in the emergence of a new American national identity. Richard Abel, University of Michigan, Ann Arbor

Electric Dreamland is a work of meticulous scholarship and original argument that deepens our knowledge and provokes new insights. Scholars of American popular culture are in Rabinovitz's debt. John F. Kasson, author of Amusing the Million: Coney Island at the Turn of the Century

Electric Dreamland is part of a growing body of work that builds an inter-medial reading of cinema's relationship to other early-twentieth-century phenomena. It draws on a wealth of archival materials, ephemera, and experiential data to demonstrate the remarkable inter-dependence of amusement parks and early motion pictures. Never again will the two entertainments be seen in isolation. Shelley Stamp, author of Movie-Struck Girls: Women and Motion Picture Culture after the Nickelodeon

...accessible, but no less rigorous in its scholarship. Patrick Friel, AfterImage

Read the introduction (to view in full screen, click on icon in bottom right-hand corner)

Lauren Rabinovitz is professor of American studies and cinema at the University of Iowa. She is the author of For the Love of Pleasure: Women, Movies, and Culture in Turn-of-the-Century Chicago and Points of Resistance: Women, Power, and Politics in the New York Avant-garde Cinema, 1943–1971.