How the Telephone, Phonograph, and Radio Shaped Modern Japan, 1868–1945 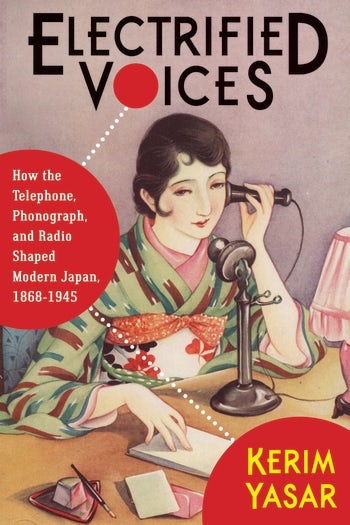 How the Telephone, Phonograph, and Radio Shaped Modern Japan, 1868–1945

Long before karaoke’s ubiquity and the rise of global brands such as Sony, Japan was a place where new audio technologies found eager users and contributed to new cultural forms. In Electrified Voices, Kerim Yasar traces the origins of the modern soundscape, showing how the revolutionary nature of sound technology and the rise of a new auditory culture played an essential role in the formation of Japanese modernity.

A far-reaching cultural history of the telegraph, telephone, phonograph, radio, and early sound film in Japan, Electrified Voices shows how these technologies reshaped the production of culture. Audio technologies upended the status of the written word as the only source of prestige while revivifying traditional forms of orality. The ability to reproduce and transmit sound, freeing it from the constraints of time and space, had profound consequences on late nineteenth-century language reform; twentieth-century literary, musical, and cinematic practices; the rise of militarism and nationalism in the 1920s and 30s; and the transition to the postwar period inaugurated by Emperor Hirohito’s declaration of unconditional surrender to Allied forces—a declaration that was recorded on a gramophone record and broadcast throughout the defeated Japanese empire. The first cultural history in English of auditory technologies in modern Japan, Electrified Voices enriches our understanding of Japanese modernity and offers a major contribution to sound studies and global media history.

With Electrified Voices, Kerim Yasar provides a brilliant and stimulating analysis of the role of sound media (telephone, phonograph, radio, and early sound films) in the transition of Japan to modernity. ANDRE LANGE, Historical Journal of Film, Radio, and Television

This is an ambitious and wide-ranging study of Japan’s modern auditory culture at a time of great changes. The book lends itself well to use in the classroom and will be helpful to historians who wish to provide a different perspective not only on Japanese history but also on the history of technology. American Historical Review

The sounds coming from Japan in this book are both strange and familiar to ears used to reading about acoustic modernity in the North Atlantic world. Kerim Yasar has found new stories and characters for asking classic questions in media history and I, for one, am delighted to be enriched by a media-historical book on Japan that is so innovative in its historical approach and its choice of media. This book sings the body electric in Japan. John Durham Peters, Yale University

Kerim Yasar recounts the fascinating story of how modernity in Japan sounded. Eminently readable, his book traces how Japan’s existing soundscape found itself translated and transformed by such modern audio technologies as the telephone, gramophone, radio, and talkie cinema, and how the process launched new debates about what it means to represent the real. Michael K. Bourdaghs, author of Sayonara Amerika, Sayonara Nippon: A Geopolitical Prehistory of J-Pop

Kerim Yasar is assistant professor of East Asian languages and cultures at the University of Southern California.